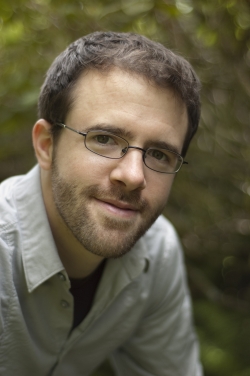 I was an atypical applicant to the M.F.A. program in creative writing. I came not from an English background, but from a double-major in computer science and philosophy. Already I was used to fielding “So what are you going to do with that combination?” at family gatherings; that I was now adding poetry to the list surely was not going to help. Instinct told me that as long as I followed my compass, I didn’t need a map. I believed that by following what seemed most fascinating and urgent, I would find my way. In a workshop with Linda Bierds, an assignment prompted me to write a prose poem. I found myself researching an artificial intelligence competition, something called the Turing test. In a series of typed chats, computer programs compete to see whether they can pass themselves off as human. A program whose responses were indistinguishable from a human being’s would not only be faking the power of thought, many in the field believe, it would have that power. Here it was: computers, in a clash with high philosophical stakes, on the battlefield of language. I turned in a prose poem that week called “The Most Human Human,” a title used in the contest to designate the real person whose responses the judges were most confident came from a human being. The poem became part of my master’s thesis, but the questions it raised wouldn’t end there.

Over several months, the prose poem grew into an essay; several months later, the essay became several essays and a mountain of notes. Then I decided in the spring of 2009 to actually call the organizing committee in England to see if I could compete in the event. They said yes. Now in a very pressing and literal way, I had to ask myself, drawing on everything I had learned as a philosopher, a programmer, and a writer—What does it mean to be “human”? The increasingly urgent need to come up with some kind of answer before  I left for England became the lightning rod that drew all of those early drafts together, drafts that came before I knew what they were drafts of. At long last, the piece had found its true form. Its title was the same, now in italics instead of quotation marks: The Most Human Human, my first book of nonfiction, begins with that contest. As for what’s next, I can’t say. Notes continue to pile up on this and that. I still follow the compass needle where it points; I am still, happily, mapless.