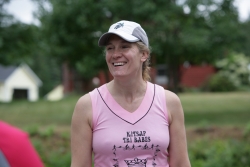 I entered the English graduate program in 1986. My mind’s desire was to study feminist critical theory. The buzz word du jour was “praxis.” One’s theory must be grounded in practice; one must walk the talk. I expected to create praxis through a professorship, and I did spend a decade in that role, but I have had a far greater impact in another arena. Twenty-five years later, I remain a deconstructionist at heart, but my path to praxis is one I never imagined. In 2003, I convinced friends to do a sprint triathlon. These days, I create empowering praxis by completing Ironman triathlons and training 250+ pound “Kitsap Tri Babes” to complete their own Sprint Triathlons.

It amazes me how integral the critical theory of my graduate school days is to my ability to effectively train beginning triathletes. I am training women who never conceived of themselves as athletes. Many of them come to the group grossly alienated from their bodies. It is usually an unhealthy experience (such as abuse or a traumatic event) that has caused this alienation from their bodies. The unhealthy experience solidifies into a negative self-narrative. This narrative then manifests as lack of physical fitness. Step 1 to success is to deconstruct the word athlete and reconstruct a definition that includes them. Step 2 is to create a new narrative.  Our motto is “comPLETE not comPETE.”

The group promises a new narrative: “if you can go from the couch to the Häagen-Dazs, you can comPLETE our first training; if you can comPLETE the first training, you can comPLETE the second, and so forth until, 12 weeks later, you WILL successfully cross that triathlon finish line.” We re-define success in terms that equate “finishing upright” with “good enough.” Through re-definition, we reconstruct an empowering narrative that allows women to transform their bodies and then their lives. Over the years, the group has supported 350+ pound women, a deaf woman, a blind woman, an amputee, and abused women in re-defining their relationships with their bodies and in doing so, creating a more empowering life narrative.