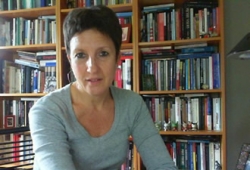 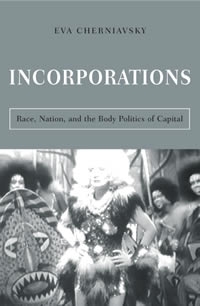 The Hilen endowment was established by the Hilen family in 1986 in honor of Andrew R. Hilen, a noted scholar of 19th-century American literature at UW from 1941 until his death in 1982.

The endowment funds the Andrew R. Hilen Professorship in American Literature and Culture and also generates vital funding for graduate students and for public events on the UW campus. Eva Cherniavsky has held the Hilen Professorship since joining the faculty in 2005, and the endowment has made possible the completion of her most recent monograph, Neocitizenship, as well as served the recruitment of top-tier graduate students to the Department and provided invaluable research support for dissertators.

Cherniavsky’s work represents a cultural studies approach to questions of political life in the present moment. She is currently at work on the final chapter of Neocitizenship, a study of political culture in the contemporary United States that looks specifically at the practices and ideas of citizenship in the context of what many academic and nonacademic commentators frame as a crisis of modern democratic institutions. This crisis is signaled, for example, in the waning rule of law (which appears less and less to constrain the doings of state and corporate actors) and in the influence of private donors and corporate interests on the operations of legislative, executive, and judicial power. If, as the Slovenian critic Slavoj Zizek suggests, the historic “marriage between capitalism and democracy is approaching a divorce,” Cherniavsky asks what this entails for the historical form of political agency we call “citizenship” and for the possibilities of civic opposition to privatization, austerity, war, and surveillance.

In particular, Neocitizenship argues that popular culture has registered the transformations in the institutions of political life more thoroughly and often more perceptively than has the scholarship in political theory that dwells expressly and critically on the effects of neoliberalism. Bruce Sterling’s near-future dystopian science fiction novel Distraction, for example, envisions a U.S. in which economic crisis and environmental devastation have forced most of the population out of the money economy and into network-based nomad communities. Interestingly, however, in this novel, social disaggregation is not presented as social disorganization—and indeed, most of the narrative is concerned with new forms of social and political agency set in motion by the government’s retreat from any obligation to the welfare of its citizens. Paul Beatty’s The White Boy Shuffle, which cross-hatches postmodern narrative form with the tradition of African American social satire, attends specifically to the effects of this retreat on those populations historically excluded from the rights and benefits of citizenship. The novel brilliantly tracks the historical convergence of multiculturalism with the dismantling of Civil Rights era gains, and explores the possibilities and limits of political opposition for a surplus population, visible to the institutions and agencies of government power only as a demographic risk factor. Taking up these and other narratives, I argue against the prevailing tendency in political and journalistic commentary to indict the citizenry for its failures (routinely expressed as the lament that the U.S. electorate is passive and uninformed), suggesting instead that transformations in the organization of political and economic power entail a reimagination of where and how civic opposition transpires, a reimagination to which expressive culture is central.

The endowment supports the Hilen Professor by funding essential time for research and writing over the summer months, as well as travel to conferences for presenting work in progress, and when needed, the services of a research assistant. But it is also a critical resource for graduate students. Since 2006, the Hilen endowment has helped to bring six stellar applicants into the graduate program at both the MA and PhD levels by providing financial support during the first year of graduate study and allowing these students to focus exclusively on course work. In so doing, the endowment aids the Department in competing for excellent applicants, helping to ensure the intellectual diversity and aggregate talent of each new incoming graduate cohort.

Recipients of Hilen recruitment fellowships have gone on to pursue research on topics such as war, trauma, and diaspora in Asian American writing; modernist writing and celebrity culture; crime, punishment, prisons, and prison abolition in contemporary science fiction; race, diaspora, and 20th/21st-century U.S. poetry and poetics.

Equally critical, over the same period, the endowment has also supported five graduate student dissertators, providing a one-quarter release from teaching and the opportunity to devote themselves exclusively to doctoral research and writing during that interval. As the recipients affirm, this kind of research support is crucial in sustaining intellectual momentum for a longterm writing project such as a dissertation, and often results in a new chapter drafted, or a crucial set of revisions, or a chapter excerpted and recast for journal publication. Hilen dissertation fellowships have supported innovative and compelling research on, for example, comparative understandings of race in Caribbean literary and performance cultures; the figure of the juvenile delinquent in 20th-century U.S. law and culture; the trope of the animal as measure and limit of the human in modern and postmodern literary culture; the uses of utopian and dystopian thematics in literary representations of the city and of urban violence.

Finally, but importantly, the endowment has provided much-needed support for graduate student travel to present their work at national and international conferences. Over the past three years, thanks to the cosponsorship of the host institution which has graciously afforded a tuition rebate for UW participants, the Hilen endowment has also sent six English Department graduate students to the Futures of American Studies Summer Institute at Dartmouth College, a week-long event that brings together graduate students from institutions across the U.S. in order to share work and ideas formally and informally with a roster of nearly twenty invited plenary speakers and distinguished Americanist scholars from the U.S. and Europe.