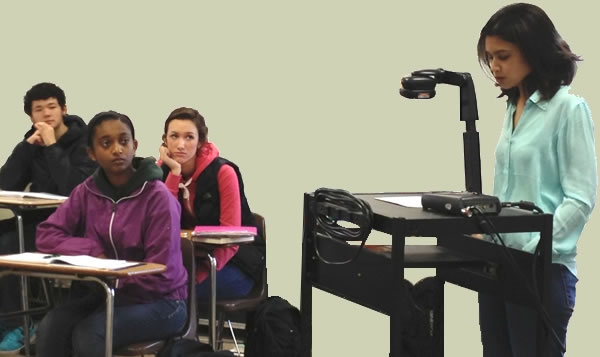 In 2011, Melanya Materne, then a sophomore studying English at the University of Washington, received the Thomas A. Lederman Humanities Award; the following year the English Department awarded her the Tia Vall-Spinosa Sullivan Scholarship. Director of English Undergraduate Advising Mel Wensel says of Materne, “She is a brilliant young scholar, a true lover of writing and literature. She is somebody who is already in the process of making herself into a master teacher, somebody who will pass on the values of the humanities to future generations. Some might regret that Melanya is not preparing for a PhD in English, but I am delighted that she has decided to bring her formidable talents to secondary education.”

Materne received the Lederman the spring before she started coursework to complete her English Language Arts Endorsement for teaching in secondary schools. Materne recounts, “The Lederman allowed me to concentrate on my endorsement coursework with an intensity that wouldn’t have been possible if I had needed to work more. It also afforded me time to volunteer at Shorecrest High School through the Phoenix Project, which gave me critical classroom experience and led to Shorecrest High School hiring me as a para-educator.”

Along with her service work in the community, Materne has had the opportunity to do research; for example, in Frances McCue’s Honors course on teaching, she researched the new and widely adopted Common Core State Standards and the influence they will have on the arts in education. She conducted interviews with English teachers in Shoreline (where she had connections because of her service work) in order to determine whether the Common Core was changing the ratio of literary and informational (nonfiction) texts they assigned and taught. From this research, Materne learned how teachers negotiate their personal teaching philosophies and the expectations of administration and government, concluding that although the Common Core would not likely change the amount of literature taught in the English Language Arts classroom, it might very well change the way educators framed literature’s relevance, usefulness, and relationship to skills such as composition, argumentation, and critical thinking.

Under Professor Candice Rai’s supervision, Materne investigated this possibility as part of the research for her 32-page Honors thesis and Undergraduate Research Symposium presentation. After performing a close analysis of the Common Core, Materne discovered that the Standards made troubling assumptions about literary texts: that they are not argumentative texts and therefore cannot be used to teach students how to analyze and produce effective arguments. These assumptions render literature largely irrelevant to the Standards’ central goal of promoting College and Career Readiness. As a scholar of the humanities and an interdisciplinary writing tutor, Materne suspected that these assumptions were problematic and extended her research to investigate 1) the way postsecondary institutions frame literature’s relationship to skills such as composition, argument, and critical thinking, and 2) how a high school English teacher could productively incorporate literature into the teaching of those skills, thus demonstrating literature’s relevance and usefulness. After analyzing relevant academic literature from scholars of postsecondary education, Materne concluded that the context of knowledge production in postsecondary institutions demands not only the ability to write arguments, but also the habit of thinking argumentatively about everything— including texts that do not explicitly present themselves as arguments. As a response to the discrepancy between how the Common Core and postsecondary institutions frame literature’s relevance and usefulness, Materne concluded her thesis by sketching a theory for using a rhetorical framework to bridge the apparent gap between literature and argumentation. Rai says that “Melanya is as generous as she is demanding of herself and others, dedicated to issues of social justice in education, and committed to finding ways to make literary and rhetorical studies publicly relevant.”

The high level of academic performance and deep research into educational issues that Materne was able to achieve with the help of the Lederman Award made her a strong candidate for a Woodrow Wilson-Rockefeller Brothers Fellowship (WWRBF) for Aspiring Teachers of Color, which she received this December. The WWRBF foundation aims to diversify the country’s teaching cohort, reporting that “Current trends indicate that, by 2020, the percentage of teachers of color will fall to an all-time low of 5 percent of the total teacher force, while the percentage of students of color in the system will likely exceed 50 percent.”

“Endowed funding has allowed me to pursue my vocation. I’m immensely grateful to be doing exactly what I want to do. I’m busier than I’ve ever been, but I couldn’t be happier about it.”