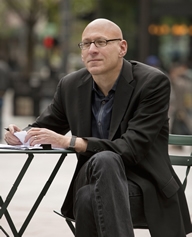 University of Washington professor David Shields has authored, coauthored, or coedited 14 books, includingReality Hunger (named one of the best books of 2010 by more than thirty publications), The Thing About Life Is That One Day You’ll Be Dead (New York Times bestseller), Black Planet(National Book Critics Circle Award finalist), and Remote(winner of the PEN/Revson Award). In 2010, Shields was granted Professor Loren Douglas Milliman Endowed Funds for a Distinguished Writer; since then he has produced How Literature Saved My Life (2013); Fakes: An Anthology of Pseudo-Interviews, Faux-Lectures, Quasi-Letters, “Found” Texts, and Other Fraudulent Artifacts (2012); The Inevitable: Contemporary Writers Confront Death (2011); Reality Hunger (2010); and dozens of essays that have been published in such periodicals as the New York Times Magazine, Harper’s, Yale Review, and the Guardian. “The Milliman allows me to spend the entire summer writing rather than teaching. It’s impossible to overestimate how valuable this is.” When we interviewed several of Shields’s recent students about their work with him, each went on at length about his invaluable support of them and their writing. And in a January 2012 interview with Australia Television in Melbourne, Shields talked about the relationship of his teaching to his writing: “I designed a course on the self-reflexive gesture in the essay and the documentary film. The course packet for the class that I taught from for several years was a huge blue binder with literally hundreds of quotations by authors from Thucydides to Joan Didion.”

After years of his students learning from and pushing back against that course pack, it became the book Reality Hunger. Shields says, “Reality Hunger became quite controversial both here and in England because it has no traditional citations. But it had become terribly important to me to democratize sources—to get a lot of voices going at the same time, as a way to destabilize genre and provenance. It’s unusual that a professor’s course binder became not only a book but has become the most discussed book that person has written thus far.”

In response to questions about Shields as a mentor and teacher, Katie McClendon, now working on her MFA at Purdue, replies, “David’s work with collage, and his example as an author who experiments with form that boldly breaks rules to create interesting and innovative work, inspire me to continue to experiment when I write and to consider the best way to tell my stories. As a queer-identified writer, I’m deeply invested in the particular stories of my life and the lives of those in my community, but I worried about whether or not my work would be taken seriously-if it’s too close to the genre of memoir. Working with David helped me become bolder when I write and trust that I know when a story is working.”

In the interview with Australia Television, Shields said, “I don’t want to present myself as some uniquely dedicated teacher. In a way, I’m a very selfish teacher who teaches out of his own passions and tries always to be triggering my own work; but as a result, I’m a very engaged teacher because I’m actually trying to figure stuff out with my students in the classroom.”

That approach to teaching clearly inspires his students. As current undergraduate English student Alex Guardado states, “It’s been amazing to work with a professor whose work blends academic erudition with artistic exploration. I’m truly appreciative of his mentorship and his commitment to helping his students discover new and interesting ways of finding a place for literature in the 21st century.”

“In a way, I’m a very selfish teacher who teaches out of his own passions and tries always to be triggering my own work; but as a result, I’m a very engaged teacher because I’m actually trying to figure stuff out with my students in the classroom.”

Elizabeth Cooperman offers that “David takes his teaching seriously, but it extends beyond the classroom walls, whether it’s a walk-and-talk meeting on campus or an energetic email exchange. What I’m so grateful for is that he’s made it his business to continue to mentor me long after my official graduation from the program, and in this way my education continues. Since graduating from the MFA Program at the University of Washington in 2010, I’ve continued to work closely with David as a researcher, editor, and collaborator. We have co-authored two published essays and co-edited an anthology (Life is Short; Art is Shorter: An Anthology of Very Brief Prose), currently under consideration for publication. On several occasions David has asked for feedback about his works-in-progress, inviting me into conversations about his own creative process. Over the years, he has come to treat me more like a peer than a former student, though I still very much consider myself an apprentice.”

After her first meeting with Shields, Cooperman “realized that David has a talent for getting to know people quickly and has a particular intelligence for one-on-one mentorship. When I got home after that first meeting, I discovered an email from him with a personalized reading list to help guide my project, as well as a list of books he thought my dad would like.”