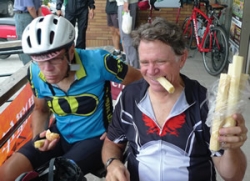 At the end of the academic year in 2010, I retired from the English Department, where I had enjoyed the pleasures and the privilege of teaching and writing about medieval and early modern literature for 38(!) years. I had recently completed a four-volume edition of critical and cultural studies of medieval drama, and although there were more projects to work on, I thought it might be time to turn in another direction. For a long time I had been involved in outdoor adventures of one kind or another, and a group of friends was now proposing a six-week mountain biking trip in Patagonia the next winter (2011), riding 1350km down the Carretera Austal (“Southern Highway”), the primitive unpaved road that Pinochet had started to punch through the remote southern part of Chile in the 1970s (and completed as far as Caleta Tortel in 2003). In the end, a team of eight of us made this amazing trip from late January to mid-April in 2011. We flew south to Buenos Aires, Argentina, then west to Bariloche, and from there we rode mountain bikes to the Chilean frontier and to points far far south (for the blog of our trip, see http://patagonia.johncoldewey.com/). The next winter I indulged another passion and signed up to become a ski instructor at Snoqualmie Summit Ski Area. In the spring of 2012, I passed my PSIA (Professional Ski Instructors of America) tests – written and on-snow – to become a Level 1 Alpine Ski Instructor. Then, just this past year, in the fall of 2013, a team of six of us flew to the Far East to ride road bikes for two weeks around the island of Taiwan (the Washington-Taiwan Friendship [WTF] Cycle Tour; for the blog of our trip, seehttp://taiwan.johncoldewey.com). Five of us stayed on and flew to Bangkok for a brief tour of Thailand. Back in the present, some exciting talk has surfaced about a group of us riding mountain bikes around Iceland in the summer of 2015.

The personal sides of my life have kept me busy as well. This includes holding down the fort for my (still) working wife, Christine Rose (a medievalist at Portland State University), caring for our rescued greyhound, Ava; the joys of seeing my two sons and their families, with a three-year-old and a one-week-old grandson; the completion of long-delayed building projects; extended trips to see friends in Europe and England, Canada, and Mexico; involvement in local arts and music. And time will tell: there seems to be a children’s book gestating.

Meantime, I often think warmly of my former colleagues, my undergraduate and graduate students – my intellectual children! I trust that all goes well with them. I keep in touch with some and would love to hear from others. When I look back at the long and winding road my life has taken I feel very lucky; with a little further luck, the road ahead offers even more happy possibilities.