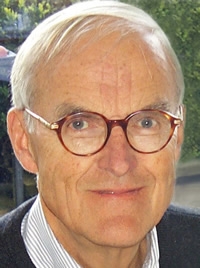 Harold (Hal) Peter Simonson was born December 27, 1926, in Tacoma and died there June 6, 2011. He is survived by Carolyn, his wife of over 59 years; children Eric (Erin), Greta, and Peter (Ann); grandchildren Maria, John, Emma, Audrey, Olivia, and Erika; and ten nieces and nephews.

In Tacoma, he attended Grant Elementary School, Jason Lee Intermediate School, Stadium High School, and the College of Puget Sound (BA, BEd) and for a time served in the US Army. At Northwestern University (MA, PhD) he met Carolyn. At the University of St. Andrews (Scotland) he earned his theological degree (BPhil in Divinity).

After retirement in 1991, he was ordained by Tacoma’s First Congregational church and served two periods as interim minister. He also was a volunteer hospice chaplain and a Tacoma Nightwatch minister.

He was a loving husband, father, grandfather; an earnest teacher and author; and a steadfast friend to many