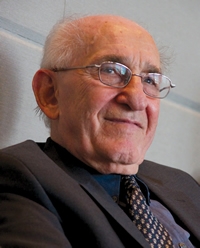 Herbert Blau will be remembered as a theater innovator and scholar who introduced American audiences to avant-garde playwrights such as Samuel Beckett, Harold Pinter, and Bertolt Brecht. A member of the University of Washington faculty since 2000, Blau died May 3, 2013, on his 87th birthday.

Blau’s six-decade theater and academic career was extraordinary for a Brooklyn-born plumber’s son who studied engineering as an undergraduate and attended not a single play while growing up.

He earned both a master’s degree in speech and drama and a doctorate in English and American literature from Stanford University. Though a longtime professional theater practitioner, Blau was ambivalent at best about academic theater departments.

A stage experimenter, Blau cofounded and codirected the Actor’s Workshop of San Francisco from 1952 until 1965 with partner Julius Irving, overseeing a famous production of Beckett’sWaiting for Godot at California’s San Quentin State Prison.

He codirected the Repertory Theater of Lincoln Center in New York until 1967. After a brief stint as provost of the then-new California Institute for the Arts, Blau founded another experimental theater group called Kraken, borrowing the name from a letter Herman Melville wrote to Nathanial Hawthorne.

At UW, Blau was the Byron W. and Alice L. Lockwood Professor of the Humanities and professor emeritus of English and Comparative Literature, with an adjunct appointment in the School of Drama.

Blau was the author of dozens of articles and many books, notable among them being The Impossible Theater: A Manifesto in 1964, and As If: An Autobiography (Volume 1), in 2011.

He was annoyed by productions that played Godot for laughs and preferred it when the audience didn’t know what to expect.

Interviewed by the College of Arts and Sciences publicationPerspectives in 2011, Blau said, “I often say to my students, ‘When I know what I think, I couldn’t care less. It’s when I don’t know what I think, when I’m utterly baffled, that I really like it, because that’s when I have to keep thinking. It keeps the mind going’.”

ADAPTED SLIGHTLY FROM
AN ARTICLE BY PETER KELLEY