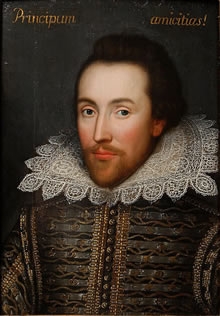 When guests entered ACT Theatre on November 15, 2013, they knew just two things: they were at an event sponsored by UW’s Department of English, and it was about Shakespeare. That night they experienced a different kind of lively theater event in the name of the famous bard—one that he probably would have endorsed.

Shakespeare Forever: His Remarkable Legacy featured ten experts who each took a turn on stage to present an aspect of Shakespeare’s legacy—each speaking for 5 minutes and 54 seconds with 20 slides. The format of short presentations, which has gained considerable popularity in the US, has been used successfully by the Burke Museum for their Short Takes evenings. The design is based on the Japanese Pecha Kucha, introduced in 2003 to keep presentations concise and fast-paced.

Six professors of English, two professors of Drama, the associate artistic director of ACT, and one undergraduate UW honors student spoke about aspects of Shakespeare ranging from the English Department’s study abroad program in England, during which students attend Shakespeare performances (Professor John Webster), to an animated talk on Shakespeare’s curses and insults (Professor Collette Moore), to the problems of staging Shakespeare (Emeritus Professor Robert Dahlstrom). All ten presenters were spurred on by the limitations of their time on stage and the click of each slide that accompanied their talk. In order to stay with the slide, they needed to move with the topic and not lose ground.

Gary Handwerk, chair of the English Department, and Kurt Beattie, artistic director of ACT, served as co-moderators, introducing each presenter and adding their own comments. Handwerk’s wish was not only to have the audience leave with a deeper sense of Shakespeare, but also to spur continued conversation at the evening’s end. Judging from the high buzz of the audience at the reception that followed, the evening was a great success. The department expects to offer this event with ACT annually, focusing on a different author or playwright each year.