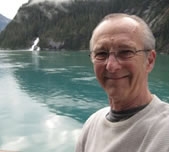 Tom Lockwood joined the English Department in Fall Quarter of 1967; he will retire after Winter Quarter of 2015. During his almost forty-eight years in the Department, he has excelled in all three faculty activities: teaching, research, and service. He has also accumulated one of the biggest retirement funds in the history of academia.

Tom and I taught together in the Department’s Literary London Program in Spring Quarter of 2001. I attended all his classes and the plays his students watched, and discussed assignments, grading, and class activities with him. What I saw and heard confirmed what I already know second-hand, that Tom is a rigorous, learned, hard-working, demanding, and very friendly teacher. He never lost his cool in what is a difficult faculty assignment except when we took the students to Kenwood House. There is a Rembrandt painting there, and when a student asked if she could touch it, Tom came totally unglued.

Tom’s research has focused on English Literature of the eighteenth century. He has been awarded numerous grants for it both locally and nationally, and two of his recent publications have won prizes, none of which he has offered to share with me. For this notice I reread his Post- Augustan Satire (1979), and it remains THE book on its subject. His later work, a mammoth three-volume edition of Henry Fielding’s plays, took him fifteen years of work in Seattle, London, and other places in both countries. I have not read the over two-thousand pages in the edition, though I have examined the volumes carefully and would buy them were I a millionaire. They are so thorough, careful, complete, and intelligent that it is extremely unlikely the scholarly world will ever need to replace them. The most remarkable fact about them, however, is that while Tom was in London summer after summer supposedly doing research, he seemed to spend a great deal of time on the British Library’s computers trying to find out how the Seattle Mariners did the previous night.

Tom’s service to the English Department, the College of Arts and Sciences, and the University of Washington has been of the highest quality. Among many other assignments, his work as Department Chair (1992-97) has stood out. No other Chair was ever more on top of the daily grind, more adept at the recruitment of new faculty and the reconciliation of conflicts, and more insistent on high standards in all Department functions. If there were a blemish on Tom’s service record, it was his short-sighted decision in 1994 to appoint me Director of Undergraduate Programs in the Department.

Since 1967, English Departments have become narrower, more ideologically driven, less humane, deeply bureaucratic, too populated by vulgar careerists. Had it not been for Tom Lockwood, the University of Washington’s English Department would have been one of those I describe in my previous sentence. I am lucky to have had Tom for a colleague and friend. The English Department has been equally lucky.