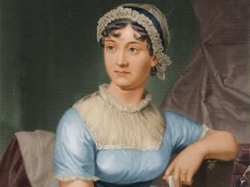 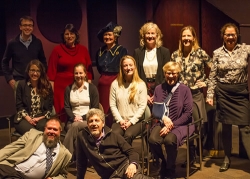 How much can one learn about Jane Austen in five-minute tidbits? Quite a lot, as guests discovered at a February 19 event hosted by the UW Department of English. The event, at ACT Theater, featured ten Jane Austen aficionados discussing the author’s long-standing influence for five minutes each.

The evening’s strict format of five minutes and 20 slides for each presenter is based on the Japanese PechaKucha, a presentation style developed in 2003. By exploring many facets of Jane Austen through the perspectives of ten different people, the event offered insight, depth, and variety while showcasing many UW faculty members.

Jane Austen is not the first author to be celebrated by the Department of English using this fast-paced approach. Last year the Department presented a similar—and equally popular—evening about Shakespeare. When deciding which acclaimed author to feature this year, Jane Austen’s name rose to the top because of her following and the devotion of the local chapter of the Jane Austen Society. The event drew a sold-out crowd, including many members of the Jane Austen society, a few of whom dressed in period costumes.

The College of Arts and Sciences included the Jane Austen event in its “Insider Series,” an offering of special events for donors to the College. A pre-event reception for Insider Series participants featured a short presentation by Brian Reed, chair of the English Department. There was a post-event reception as well, for the general audience.

Reed, co-emcee for the evening with Todd London, executive director of the UW School of Drama, kicked off the evening with a quick overview of Jane Austen’s history and lasting influence. Next, London entertained the audience with his own take on Austen’s influence with a wonderful parody. The two emcees then started the clock with the first presenter, and deftly added their own commentary between each five-minute presentation. The audience heard from professors, graduate students, and actors on subjects ranging from Austen’s relationship to nature to how Austen’s books can be transposed to the stage. Woven into the evening were musicians playing period music on period instruments, actors reciting familiar lines, and a professor parodying the academic who counts the number of pronouns in Austen’s books.

This kind of evening depends on riveting information matched by accomplished presenters and slides that keep the pace animated. What emerged was a wonderful mixture of academics and sophisticated fun that celebrated the many pieces of Jane Austen’s world and words.