To Grow and Flourish 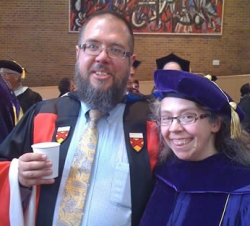 If you are in a conversation with Brian Reed, the new Chair of the English Department, many things can happen. He’s likely to ask you what you are up to—and start listening, which he does well. He has been listening to our students: “We in the English Department are helping them to develop the communication skills that they will need to be successful in the twenty-first-century workplace, and we are teaching them to think bigger, about the values and goals and experiences that make for a life well lived.”

But if you press, Reed will tell you what he is up to, in which case all bets are off. He might talk about prawn and scallop laksa done the Australian way (yum), the relative virtues of voice-recognition translation programs (“How do you say ‘yum’ in Polish?”), square dancing, centaurs, the national average of how long English doctoral students take to complete their dissertations, the “In-Yer-Face” theater of 1990s Britain, the Museum of Modern Art circa 1960, Pilbara rock art circa 10,000 BCE, and/or wonder why there is no word for when a novel starts quoting from a poem. He might say something in Russian. (This is on request, and probably more frequent an occurrence in one of the other departments he’s in, Slavic.) He has, while holding a mixed beverage in the Faculty Club and forced into a season-by-season analysis of America’s Next Top Model, ruminatively uttered the words, “I have learned many things from Tyra Banks.” He has not been kidding. Oh, and Brian Reed might talk about poetry.

This is his home—somewhere west of Kentucky (born), east of Harvard (colleged), north of Oxford (University, Rhodes-ed), and south of Stanford (doctored): the world of poetics. It has taken him to Germany, Poland, Russia, and most recently Australia—his reports back (in the forms of books, articles, and reviews) from poetic fields are as far-ranging as they are grounded.

In his copious free time—there’s not a lot, but the Department’s new Chair seems not to sleep—he is working on his fourth book of criticism (he’s co-edited two other books), a history of contemporary poetry.

Reed comes to the chair's office as a seasoned and respected administrator. He directed the Department’s Graduate Studies Program—a job he made

especially memorable by beginning a departmental faculty retreat with a multi-media presentation of the Graduate Program that was not only informative but utilized “The Wizard of Oz” as its theme (graduate student meets miscellaneous characters and surmounts various obstacles en route to getting a job Somewhere Over The Rainbow and realizing There’s No Place Like Home).

But playfulness is not to be mistaken for flipness: Reed takes intellectual inquiry very seriously, in multiple forms. His favorite poem about reading is John Ashbery’s “The Instruction Manual,” and whether there is any similarity between its speaker being tasked with writing (yes) an instruction manual on new metals—while being pleasurably distracted from doing so—and Reed’s own time at the Moscow Institute of Steel and Alloys is, as they say, one for the books. All this marks him as a Chair whose respect for the particulars of conversation and the specifics of the world is as unbounded as it is genuine. “The world and the academy are swiftly changing,” he notes. “As Chair, I have an opportunity to work with my colleagues to update our curriculum, diversify our faculty, pursue increased community involvement, and otherwise make UW English a place where people come to learn, grow, and flourish.”