CareGifted: In the End, It's All Worth It 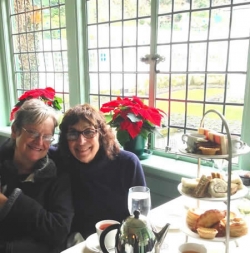 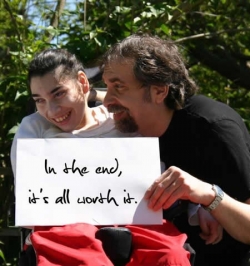 “I am a professional imaginer!-- and yet  even I couldn’t imagine what caregivers do for their special-needs family members every day.” Poet Heather McHugh used her 2009 MacArthur “Genius” award to launch a non-profit that provides week-long getaways to people who have spent a decade or more doing full-time care for a family member. After a decade of heavy-duty care (diapering, laundering, cooking, feeding, lifting, toileting, getting relatives to hospitals and therapies, repairing what’s broken, maintaining what can never be fixed), many caregivers themselves are at risk. Her acute awareness of the work of caregivers came when her godson’s first child was born in 2011. Taking care of their specials-needs child, giving up almost everything to do so, this young couple inspired McHugh to imagine forms of respite and reinvigoration for lifelong family caregivers who’d been at it for decades.

A week off may not seem like much to people accustomed to regular vacations. But caregiving has no time off, and that week brings inklings of lasting relief for the isolation and exhaustion they experience, and the compassion and friendship that they need to go on. McHugh calls that week “a week in which timelessness can actually exist, and the pressures of time recede.” The first two days away, caregivers ask what is scheduled for 3:21 next Thursday; it takes two days to loosen the grip of daily drudgeries prescribed by complex scheduling demands, each moment of each day. At home, they’re locked into timetables, administering medications five or six times a day, or nutrition even more often, to family members who may not be able to hold a spoon. After the first couple of days on retreat, they finally ease into the kinds of timelessness afforded by the art and nature that surround them on ocean islands or vineyard settings offered them by CAREGIFTED.

Both art and caregiving create a heightened feeling for life. “There’s a way in which it’s an intuitively logical connection: people whose lives are devoted to creativity might find ways to use their talents for others. The arts are so much about reaching out to people one doesn’t know, trying to say something meaningful about the human condition—whether in words or with music or through film or painting” (Robin Black, Board Member). CAREGIFTED envisions artists offering master classes in various arts and instruments, or performances and exhibitions, or art works the purchase of which might contribute to CAREGIFTED’s retreats.

Not only does art provide part of the financial infrastructure that supports the caregivers, but both before and after their one week off, caregivers yearn to tell their stories. As Tricia Elsner, a single mom of two disabled teenagers explains, “It ends up being not just one week off, but …it lifted a stone from my chest.” Until CAREGIFTED offers the opportunity, many caregivers don’t have the time or invitation to share their stories. At most they may have 10 minutes a day in which, via the internet, to share messages or blog posts. CAREGIFTED has featured such writings (http://www.caregifted.org/blog/) and McHugh looks forward to collecting their experiences in word and image, saying “Their accounts are uncommonly moving — no need for amplification or ornament, fancy vocabulary or artful metaphor — though many have those gifts. Just their insights into their everyday home lives — and the grounds of life itself — are inherently powerful.”

Their battles often seem endless — not only with medical and emotional challenges but even with the agencies or services meant to help them; and the nature of the heavy labor they have to do can be relentlessly menial: what one mother calls the works of her “poop Picasso” every morning on the bedroom wall are part of it; the pee-and- poop-fouled sheets have to be dealt with; other uncontrollabilities staved off (neurological behaviors that make going out so difficult; the agonizing struggle to interpret the needs of non-verbal family members; the memory and behavior problems that go with brain anomalies; the sheer backbreaking lifting involved in toileting and bathing). Marriages often suffer; it’s also an economic battle. Yet their work is based on empathy and love. As McHugh puts it, “I was the one who taught for 40 years, but these caregivers have taught me far more. I prize what I’ve learned from them.”

Heather McHugh is also collaborating with filmmaker Adam Larsen to create Undersung, a documentary film project, which follows several long-term principal caregivers of severely disabled family members—before, during and after their one-week CAREGIFTED retreats. McHugh herself is about to fly off to Boston to cover the wedding of two of the caregivers-bloggers who had seen CAREGIFTED’s notice in the past few years. Larsen caught their relationship developing on Skype; just months ago, they got engaged. Taking part in the joyful ceremony will be two grown daughters, one each, who have lived their lives with these single parents. Both nonverbal, both in wheelchairs: neither will ever live on her own. And yet their stories now will be enriched by an extraordinarily- extended family.

And so will ours