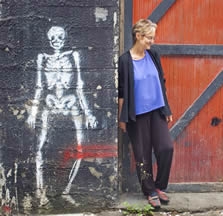 The experience of reading one of Heather McHugh’s poems is a lot like that of talking to her. Whether on the page or at the tip of her tongue, there is that rush of the high-wire performance at the level of language, puns layered with wit and wordplay, the quirkiness and quickness so characteristic of her mind at work. At the core of these word-rich acts is not only Heather’s seemingly stratospheric intelligence, but her equally powerful generosity of spirit. As her colleague, I know I felt lucky for the days I’d run into her. When I was directing creative writing, arrival to our CW faculty meetings was usually preceded by the hallways’ sound of raucous Heather-led laughter. No matter our chores ahead, I knew I was in the right place.

Students well understood the rare gift in front of them. To paraphrase one former student, Heather McHugh is the only poet who can compose an improvisational poem better than many writers’ polished work prompted simply by listing the items in her purse. Recent graduate Sarah Galvin writes: “As a teacher, she continually performed comparable magic on my disordered drafts, and most magically, I believe she showed me how to do so myself.” While Heather’s known for the dynamic, high-energy generosity of her teaching, long- time colleague Linda Bierds also points out the “quieter” side of Heather’s care: “I do remember, when I was a new faculty member attending my first MFA orals, that Heather brought small gifts for each graduate student—something I believe she continued to do throughout the years. And then I noticed that she brought little gifts for us during our faculty meetings: chocolates, usually. These things were offered quietly, no fanfare, and I was always touched by the affection the gifts represented.”

Heather once offered these words in an interview, “If you’re a poet smitten with English, you love it for its drive and not its drone. … Well, that’s the trick: the sudden unexpectedness inside the overknown.” (Note even without benefit of page or line breaks, we are treated to unexpected rhyme!) It’s that unexpectedness inside “the overknown” that kept her colleagues and students listening with delight to the remarkable workings of her sensibility since 1984, when first she became the UW Milliman Writer-in-Residence. She retires as of this fall in order to focus more fully on her non-profit organization, CAREGIFTED.

Heather McHugh’s collections of poems include several acclaimed collections, most recently Upgraded to Serious (2009); Eyeshot ( 2004), which was shortlisted for the Pulitzer Prize; The Father of Predicaments (2001); Hinge & Sign: Poems 1968-1993 (1994), a finalist for the National Book Award and named a “Notable Book of the Year” by the New York Times Book Review; Shades (1988); To the Quick (1987); and A World of Difference (1981). She is also the author of a collection of literary essays titled Broken English: Poetry and Partiality (1993), three books of translation and several prestigious anthologies.

Her honors include two grants from the National Endowment for the Arts, a Lila Wallace/Reader’s Digest Award, a Guggenheim Foundation fellowship, and, in 2006, one of the first United States Artists awards. From 1999 to 2006 she served as a Chancellor of the Academy of American Poets and in 2000 was elected a fellow of the American Academy of Arts and Sciences. In 2009, she was awarded the MacArthur Foundation “Genius Grant” for her work.

We
*♥*
Heather
Etymology’s gun moll
Anagram’s angler
Translator, true
Heart’s hearsayer
Eros & Logos
Recombinant
!
*
Hwaet:
You flew the cupola;
hoopla
happened.
Now, as our hats
flutter from the air
Take care
Heather
ever
giver:
may the coffers
of the three rivers
firehose us all
to heaven together,
unmuzzle
the angels
cheek to cheek
in the inkless language
of what we think
but do not speak.