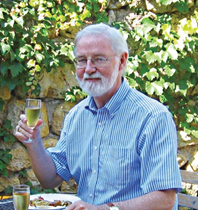 Our wild Irish lad, Míċeál Vaughan, is retiring after 42 years at the University. Born in Dublin, raised on the estate of the President of Ireland for whom his father worked, he grew up playing in what felt to him at the time like the world’s biggest, safest back yard.

Míċeál still considers his father’s home village of Lahinch on the beautiful coast of county Clare his spiritual home. Like many Irish boys, he considered becoming a priest, but decided eventually that literature was his true calling. Years after that decision, he remembers with amusement the time he was asked by Donna Gerstenberger to teach courses in modern Irish literature. Protesting that he was a medievalist and didn’t know modern literature well enough to teach it, he was told “You’re Irish: you can teach Irish literature!”

Teaching modern Irish literature allowed him to reinvent himself and he went on to teach more broadly both in drama and in Irish studies, as well as in medieval studies. He credits the chance for such reinventions as a crucial feature of his time at Washington. Indeed, Míċeál’s career has been a delicate but stimulating balance of teaching, writing and service, both in the English Department and more broadly on campus.

He will retire as Chair of Comparative Literature where he oversaw the daunting process of a 10-year review. Of course Míċeál is used to “daunting” since he has also chaired the Faculty Senate, served as Secretary of the Faculty, cofounded (with Mona Modiano) the Textual Studies Program, and directed both undergraduate and graduate studies in English: none of them jobs for the faint of heart. In between he was also on an amazingly varied number of campus-wide committees, ranging from the Faculty Council on Faculty Affairs and the Provost’s Committee on Sexism to chairing the Senate’s Advisory Committee on Faculty Code and Regulations. His heart, however, was always with his teaching and his scholarship. He names teaching in our department’s Spring in London program as one of his favorite University experiences because it gave him the chance to get to know students in greater depth than was possible on campus; he loved it. Oh, and there were no service duties there. His scholarship too had future scholars in mind. His work on Piers Plowman resulted in a classroom edition of the A Version and an electronic critical edition of one manuscript of the poem. In retirement he will be writing again on Chaucer, convinced as he is that the Canterbury Tales should end with the “Prologue to the Parson’s Tale,” since the Tale itself, he argues, is too closed to be allowed to stand as Chaucer’s last word. Also in retirement he will continue his quarterly dinners with his Dinner Group, which he co-founded (with Carolyn Allen) more than 30 years ago to discuss issues of gender and collegiality in our Department. He credits the group with saving his sanity in hard times and looks forward to more toasts to literature, travel and Ireland. As his Lahinch family might say, “May the road rise up to meet him and may the wind be always at his back.”