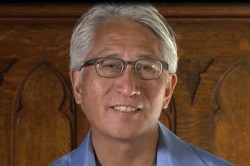 In each issue of the new digital version of English Matters, we plan to spotlight an individual or group affiliated with the UW English Department who is striving to engage different communities and publics and, on whatever scale, make this world a better, more just place in which to live. First up is Shawn Wong and the Red Badge Project.

Wong is pretty much a superstar here at the University of Washington, where he has taught since 1984. Currently a Professor of English and Comparative Literature, he has in the past served as Director of the Creative Writing Program, Chair of the English Department, and Director of the University Honors Program. His first novel, Homebase (1979) won both the Pacific Northwest Booksellers Award and the 15th Annual Governor’s Writers Day Award of Washington. His second novel, American Knees (1995), was adapted into a film titled Americanese (2006), directed by Eric Beyler. He is also the co-editor and editor of six Asian American and American multicultural literary anthologies including the pioneering anthology Aiiieeeee! An Anthology of Asian American Writers (1974) and The Big Aiiieeeee! An Anthology of Chinese America and Japanese America in Literature (1991).

None of these activities fully prepared him for involvement with the Red Badge Project. Along with a team of other instructors, he has been teaching veterans--many of them injured and/or suffering from PTSD, depression, or anxiety disorders--at Joint Base Lewis-McChord how to construct the stories of their lives in writing. Through the project, soldiers are able to translate and articulate their lives away from home, their experiences and their traumas to themselves, their families and the community. Here are a couple of places you can read about Wong's initial worries--for example, would these military men and women accept a civilian instructor?--and about his many eye-opening discoveries as he worked one-on-one with the men and women that the Red Badge Project refers to as "Wounded Warriors": "Helping Soldiers Heal Wounds with Words" (an interview) and "Helping Soliders Tell Their Stories" (a profile).

PS. Wong also traveled to China with the UW Basketball Team in November 2015. Like we said: he's a superstar.