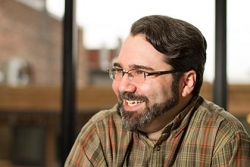 A degree in English can be a passport to many different and wonderful career paths. Teaching, publishing, and journalism are among the most popular, but the options are limited only by one's imagination. Here are a few examples of UW English Department alums who have been making news in areas often thought to be open only to graduates of STEM (science-technology-engineering-mathematics) degree programs..

Game designer Matthew Moore (BA 2008) was the subject of a profile over on the Arts and Sciences Perspectives web site. He came to the UW at age 26 after earning an associate degree at Shoreline Community College and working as software trainer, salesperson, and volunteer radio DJ. He began taking courses in the English Department and found them to be a good fit. His training in thinking about narrative, character development, and dialogue proved instrumental in landing him jobs first at Microsoft as a game tester and then subsequently at ArenaNet and at his current employer, Disney Interactive.

Brian Christian (MFA 2008) has recently published his second book, Algorithms to Live By: The Computer Science of Human Decisions, with Henry Holt. Written with his longtime friend and collaborator, UC Berkeley cognitive scientist Tom Griffiths, the book uses computer science as a way to rethink and better understand the kinds of decisions all of us make in everyday life, be they personal decisions—choosing our spouses, emptying our closets—or societal ones—rethinking urban parking, modernizing clinical trials. (You can watch him and Griffiths discuss their book in the "Talks at Google" series on YouTube.)

Ian Stevens (BA 2015) and Zachary Bivins (BA 2016) were two members of the three-person team from the University of Washington that won first place in a science communication video contest that culminated during the 2016 Ocean Sciences Meeting. The entries were critiqued and evaluated beforehand by more than 37,000 middle-school student judges hailing from 1,600 classrooms in 17 different countries. The students chose the winning videos based on their educational value and creativity. You can view their winning entry, "A Very Sticky Fish," about the northern clingfish, Gobiesox maeandricus, on Vimeo.