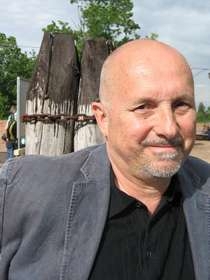 After brief forays in printing, house painting, and auto mechanics, Robert “Bob” McNamara (English ‘85, Ph.D) settled into a thirty year faculty career in the University of Washington’s English Department, where he also served as University Director of the Puget Sound Writing Project.

McNamara has received numerous awards and fellowships for his teaching, writing, and translating, among them a Creative Writing Fellowship from the NEA and a Fulbright Fellowship for language study and translation in Calcutta, India.  He is the author of three books of poetry: Second Messengers (Wesleyan University Press, 1990), The Body & the Day (WordTech Communications, 2007), and Incomplete Strangers (Lost Horse Press, 2013). Over the last thirty years, his poems have appeared widely in journals and anthologies, most recently in The Sorrow Psalms: A Book of Twentieth Century Elegy and The Book of Irish-American Poetry. McNamara also co-translated The Cat Under the Stairs, a selection of the poems of Sarat Kumar Mukhopadhyay, the distinguished contemporary Bengali poet.

My fondest memories of Bob come from our interactions off campus.  I was a new faculty finding my feet as an English Department lecturer, green around more edges than I knew I had.  At the ends of some of the longer days, Bob would stick his head in my office door and propose a trip to the Ave. for some “mentoring.”  True to his Knickerbocker roots, McNamara took his Martini up and gave fabulous unequivocal advice.  On the occasion of his retirement, English Matters sat down with Bob McNamara and asked him to take on the considerable task of outlining in retrospect a prolific career.

Bob, you can rightly be called an expert teacher of many types of writing, a teacher of teachers, a poet, publisher, literary critic, pedagogical innovator, agent of change.  What in your early career set you down these diverse pathways?

One story about my career says that it can be traced to interests and commitments that flourished during and just after my stint as a graduate student at Colorado State University pursuing an M.A. in creative writing. Teaching writing for the first time, I discovered I liked the work and had a genuine interest in pedagogy. Recognizing the value of certain creative writing workshop practices for the teaching of composition, I freely imported them. In the years after receiving my M.A., I continued teaching—composition at CSU, creative writing workshops for the Rocky Mountain Writers Guild, a course in the history and production of literary magazines at the University of Colorado. Among other things, I was coming to understand that teaching students often required unteaching them before new learning on their part could begin.  In a world of Rod McKuen and five-paragraph essays, I wanted more good poets in print, more students taught to put away high-schoolish things.

And your work in publishing?

In 1975 I founded L'Epervier Press, which in its fourteen years of activity published forty-five titles by more than thirty poets, many of whom went on to significant, even distinguished careers, including Christopher Howell, Michael Burkard, Linda Bierds, and Albert Goldbarth. I was editor, business manager, and general factotum.  And I was writing my own poetry and publishing it in literary journals.  In its existence, the press received three grants from the National Endowment for the Arts.

After that you came to UW for your Ph.D., right?

Right.  It was the fruit of these experiences and commitments, further matured during my graduate work in English at UW, that I brought to my work as English Department faculty in the Interdisciplinary Writing Program (IWP) at UW, where I learned the value of teaching college writing in the context of academic disciplines - and how to expand the impact of teaching academic writing into contexts beyond the university.  My experience teaching in IWP deeply informed the work I did helping to reinvent the Puget Sound Writing Project, providing professional development K-12 teachers of writing needed as the public schools adopted “college and career readiness” as their goal.

Can you tell us a little about your work with the Puget Sound Writing Project?

In 2005 I was invited to be University Director of the Puget Sound Writing Project (PSWP). PSWP is the Western Washington site of the National Writing Project (NWP), the largest and single most important national organization focused upon improving the quality of writing across K-12 education. Three key principles inform the Project’s work: that teachers who write are the best teachers of writing, that teachers are the best teachers of other teachers, and that good professional development takes time—little of value can be achieved through one-off workshops.  Better preparing future college students requires that we work to change the experiences of writing they have in their K-12 education.

A few years ago, I attended a League of Education Voters fundraiser and heard two students talk about the tutoring and mentoring they’d received through the volunteer organization Minds Matter. Students, most of whom are from lower socioeconomic backgrounds, sign up as sophomores, and continue through their senior years, meeting nearly every Saturday of the school year for supplementary instruction in math, writing, and critical thinking. Right now I’m co-teaching a writing and critical thinking class for sophomores, with four teachers and eight students. While I’ve just started this year, it seems pretty clear that for these students, college won’t be an alien environment full of unexpected expectations. They’ll be better prepared, they’ll know the value of having a relationship with a teacher, and they’ll know people who have their back.

Last thoughts on such a multi-modal and generous professional life?

Looking back, I remember that precarious existence as a cohesive life of words —everything difficult and worth doing, each activity carrying over into the next, all in the service of writers and writing.

A glowing orange jellyfish, it rose
above the trees into a starless sky.
And then another, just the same, but chose
a steeper arc to climb, and just as high.

I smiled before I thought. I was amazed
by the arising burning zoomorphic things.
If they had spoken I wouldn’t have been surprised
by any words such messengers might bring.

One followed the other eastward, out of sight—
surely fuel would run out, no more hot air
or flame. And sail and frame would fall from the night
like Icarus or Satan.  No one was here

except three boys returning to their car
hoods up against the cold, the curious eyes,
dumping in the trunk the sacks of gear
they’d used to tote their 2 AM surprise.

Something still seemed waiting to be said,
or was that the message? And the boys
who brought it, knowing only what fed
the engines launching their own fiery joys

drove off like angels who had done their job
delivering news to Mary or to Job.