Ties to Surfing Culture in the English Department 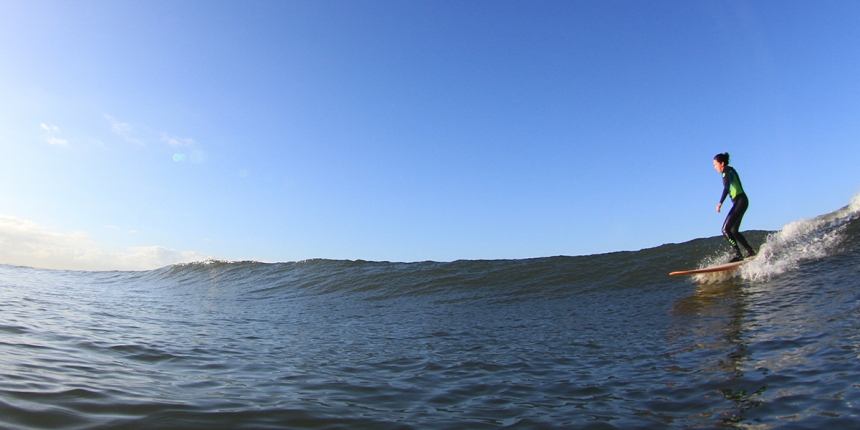 Perhaps surprisingly, interest in surfing among the UW English department community is considerable and manifests itself both as a community-building, sanity-restoring pastime and the object of serious academic study. 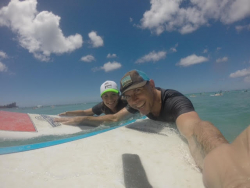 Recently minted Ph.D. Brian Gutierrez and his partner, local K-12 teacher Haley Rae Gutierrez, are avid surfers.   “Growing up near the Central Coast in California, the ocean has always been, for me, a place of rejuvenation” Brian explains.  “Some of my earliest memories are of time spent surfing with my father, so naturally to escape from the stresses of graduate school, I head to the ocean with my own family.” 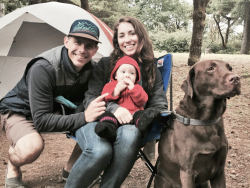 Brian feels very fortunate for his partner Haley, who also grew up near the ocean and shares a similar love for it, a love they’re passing down to daughter Isabella and four-legged son, Marley – “though we believe that his love of the water is genetic--he gets excited when we draw a bath.”   The Gutierrezes have also been pleasantly surprised by the strong community of surfers from the Seattle area who frequently meet up on the Washington and Oregon coast.  “Though the water is slightly colder than what Haley and I grew up with, it's a small price to pay to indulge in the beauty of the PNW coast.”

Senior lecturer Henry Laufenberg has been soaking in saltwater since before he counted his age in double digits.  Having grown up in the tight-knit California surfing sub-culture of kneeboard surfing, Laufenberg, at first, counted Seattle’s inland location against it.  But he quickly figured out that Washington State in fact has really good surf and a thriving (if, as is typical of the PNW, understated) surfing scene of its own.  “Yes the water’s cold, but if you love surfing enough you don’t really notice.  Surfing’s given me an opportunity to be in touch with blue-collar people from out on our state’s coastline – loggers, fishermen, people of the coastal reservations.  In California surfing is ‘central,’ but in Washington it’s located at the edges, takes place in often overlooked, marginal to the urban nexus sub-cultures of the type Jorge Luis Borges formalized as liminal spaces, ‘las orillas.’  I’m grateful for the opportunity surfing gives me to meet the world outside of the Seattle bubble on its own turf.”  There is vacation time at warmer locales too, where Laufenberg distributes water-filters for the surfer-run development and relief charity Waves For Water. 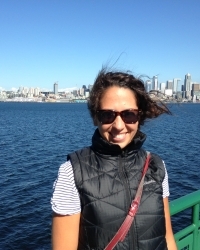 Ph.D. candidate Lydia Heberling, also a dedicated surfer, picked up the habit as an undergrad at Point Loma Nazarene University and rode it through her master’s degree at San Diego State.  Her thesis advisor there was also a surfer, and all of her meetings regarding her thesis were held in the line-up between sets.   And it was floating off the California coast that Lydia and her collaborator, Caleigh Cornell, started asking questions that would eventually lead to published academic work: who lived here before this shoreline was developed?  What was their relationship to the ocean?  Whose place are we surfing in?

Now these two have just published the coauthored paper “The Politics of Play: Surfing as Trans-Indigenous Expression of Thrivance.” Developed from a conference talk at the North American and Indigenous Studies Association conference in Honolulu in 2016, Heberling’s article argues that surfing is a place where Indigenous coastal peoples are able to make themselves visible in spaces otherwise overwritten by colonial settlers.  As such, surfing might be harnessed as a locale for “building a trans-Indigenous decolonizing movement” where surfing might be “a form of play—an expression of cultural thrivance—with vast and largely untapped political potential for Native peoples.”  Cornell and Heberling figure surfing as not just a privileged pastime but a way of revitalizing Native people’s traditional connections to the ocean, and cite efforts to do so.

Drawing on Indigenous studies and settler-colonial studies, surfing studies is a rapidly growing area of serious academic study.  The English department is thankful to have some anchors in the Pacific Ocean, its unique coastal cultures, and the schools of thought that make them more than just passing whitewash.