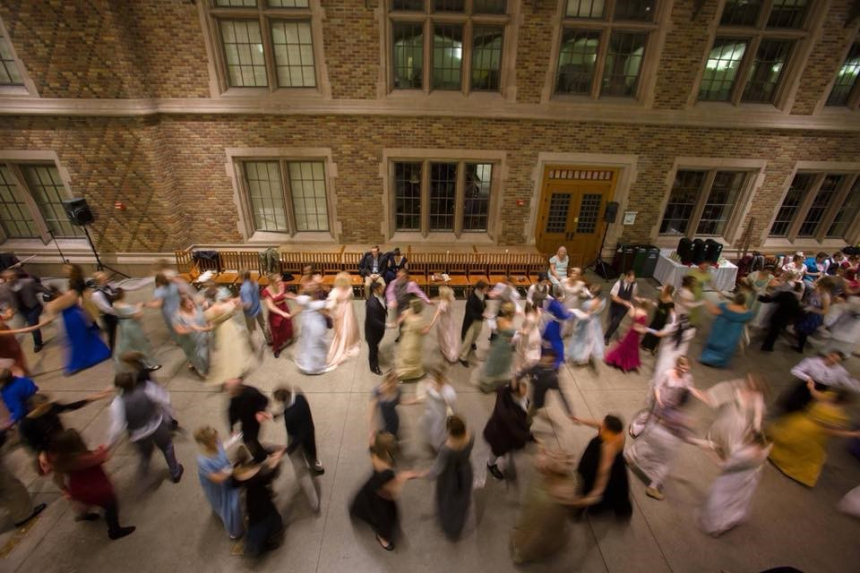 Ball attendees spin to the music of End Effects. Costumes were admired but not required. Photo by Doug Plummer.
View gallery

[Be sure to click the View Gallery button - memorable pics of a marvelous event! - Ed.]

Celebrating the life and work of novelist Jane Austen (1775-1817) on the 200th anniversary of her death, JaneFest 2017 brought 800 Austen aficionados to Mary Gates Hall for a full day of book discussions, dance workshops, and a period-costumed Regency Ball.

A collaborative effort between University of Washington grad students, faculty, staff, and local Austen-centered societies, JaneFest 2017 was for primary organizer and Ph.D. candidate Sarah Faulkner a labor of love. A lifelong Austen fan, Faulkner envisioned JaneFest as a way to connect enthusiasts from local Austen communities with scholars from UW and the English department: “It was wonderful to see the campus and community come together in such a wonderful day of celebration, connection, and learning.”  The festival was a popular success. JaneFest’s website, built by English Department graduate student Matt Poland, buzzed with hits.  4000 people were interested on Facebook, 800 participated, 200 Regency Ball tickets sold out within five minutes, the event space filled to capacity with mostly costumed attendees in less than an hour after the doors opened.  Faulkner and her cohort were “thrilled with the attendance, both at the Festival and the Ball -- the energy in the room was incredible.”

JaneFest was preceded by “JaneWeek,” an event of many facets.  The Henry Art Gallery, for instance, hosted a Historical Clothing workshop, where Agnes Gawne, President of the Jane Austen Society of North America- Puget Sound and Instructor at the New York Fashion Academy, led a lesson on the intricacies of early nineteenth-century dress, featuring artifacts from the Henry’s collection. Participants saw 200-year-old shoes, stays, and even a man’s white shirt, made iconic by the 1995 BBC production of Pride and Prejudice.

At the main event, embroidery and cooking booths were sponsored by the Jane Austen Society Puget Sound.  The Washington Regency Society put on a dazzling fashion show, displayed Regency clothing and taught card games such as whist.  The Jane Austen Book Club of Greater Seattle helped guests write letters to Jane with authentic quills and parchment and taught about tea, complete with samples. Local artist Melissa Lettis exhibited her Austen character designs and invited guests of all ages to draw their own, while Minerva Interactive shared their interactive Austen gaming experience, Pride and Prejudice Illuminated. Students from the English department helped guests battle over which heroine would win in a fist fight, vote for their favorite Austen novel through donations (Persuasion won), and purchase JaneFest shirts, tote bags, and pens. Many posed with a Jane Austen cut-out and “I <3 Darcy” signs at the event’s photobooth. One of the major highlights was the UW Libraries workshop about Regency printing and bookbinding. Rare Books Curator Sandra Kroupa guided fest guests through an assortment of 200-year-old books, while Anne Repass, President of the UW Friends of the Libraries, displayed her complete set of rare first edition Austen novels.

Adorned with flowers and candles to resemble an English country house, Mary Gates Hall’s lovely Central Commons hosted JaneFest’s culminating event, a period-authentic Regency Ball.  Guests danced to a live three-piece musical group, played whist in the salon, and gazed down from the gallery.  The proverbial good time was had by all.  “It was very well organized and engaging,” offered attendee Dayle Durbon. “There was something of interest to a broad audience from your work in drawing in many local resources.  Thanks for bringing a slice of the Regency period to life.”