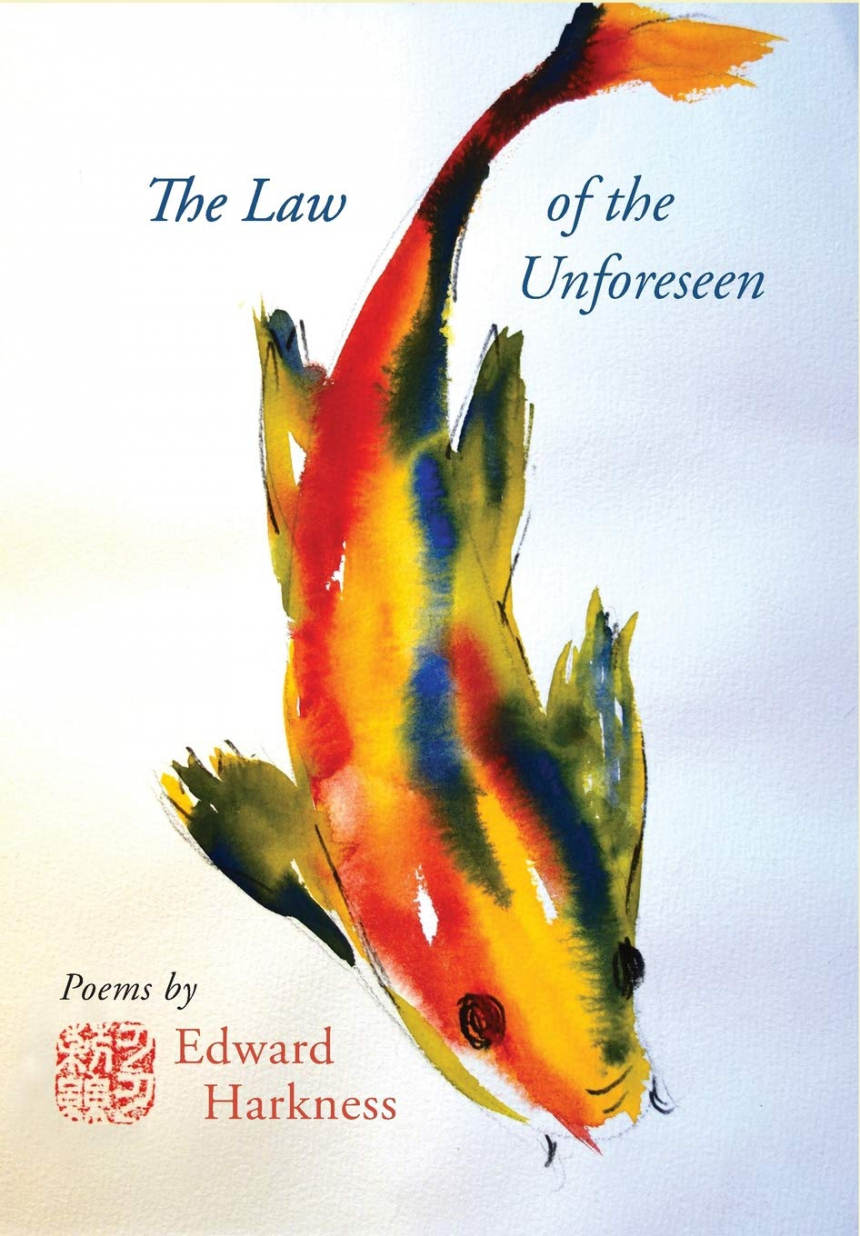 The English Department Graduate Program’s Mary Malevitsis, Ali Dahmer, and Eva Cherniavsky have been busy creating resources that feature and honor the work and careers of our graduate alumni. In the English Graduate Office, they’ve curated a new physical library of alumni books.  And be sure to check out the new Ph.D. Alumni Spotlight page on the Graduate Program website.

Edward Harkness (BA 1970) recently published his third full-length poetry collection with Pleasure Boat Studio press, The Law of the Unforeseen.  Said publisher relates that Harkness writes about “family, history, family history, the natural world -- its beauty, its degradation -- the strange miracle of consciousness. Nothing is off the table. In fact, everything is on the table, including the kitchen sink.”  Poems “move from the personal to the universal, to the quickened heart of shared emotion.”  Reviews are strong: “One nugget of [Richard] Hugo wisdom I still wholeheartedly endorse is that memorable writing has two subjects: the thing that snags your attention in the first place, and the thing you discover as you write -- the true subject, the surprise, the thing you didn’t already know. The Law of the Unforeseen is a marvelous example of this dictum, a collection to celebrate, a book with range and heart, the product of intense curiosity and love of craft. If Hugo were still around he’d still be gushing.” – David Long

Harkness’ earlier books are Saying the Necessary and Beautiful Passing Lives, also from PBS press.  Harkness, retired from a 30-year career as a writing teacher at Shoreline Community College, is interviewed at length here in Split Lip magazine, where he also visually displays apparent mastery of the art of kayaking. 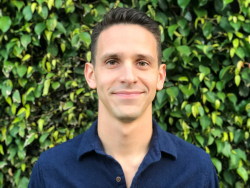 Nick Katleman (BA 2013) is a former English major now working as a memoirist in Los Angeles.  After ghostwriting for several years, he sold his first memoir to Simon & Schuster. The book, You Can't Fall Off the Floor: And Other Lessons From a Life in Hollywood, follows the star-studded career of Katleman’s grandfather Harris Katleman. In addition to tracking Harris' journey from mailroom employee to the President of Twentieth Century Fox, the book illuminates the growth of television during the golden age of the entertainment industry. Writing his grandfather's story encouraged Katleman to launch Storyflect, a memoir-writing service that captures clients' stories in the form of custom books. Katleman is in the process of hiring writers and prefers them with degrees in English.

Kathryn Trueblood’s new novel came out this fall. Take Daily As Needed: A Novel in Stories (U New Mexico Press) portrays parenting while chronically ill with the desperado humor she believe the subject deserves.  The book is reviewed positively in Publishers Weekly.  Take Daily as Needed deals honestly with gritty issues—kids on meds for behavior modification, kids taking care of ill parents, parents taking care of their elderly parents, medical debt and prescription costs, and the effects of trauma in children.

Trueblood’s previous novel, The Baby Lottery, was a Book Sense Pick in 2007, and her story collection, The Sperm Donor’s Daughter, received a Special Mention for the Pushcart Prize in 2000.  She teaches a special topics creative writing course at Western Washington University that focusses on narratives of illness and healing.  Trueblood is an active public artist and intellectual; a full calendar of events can be found at her website. 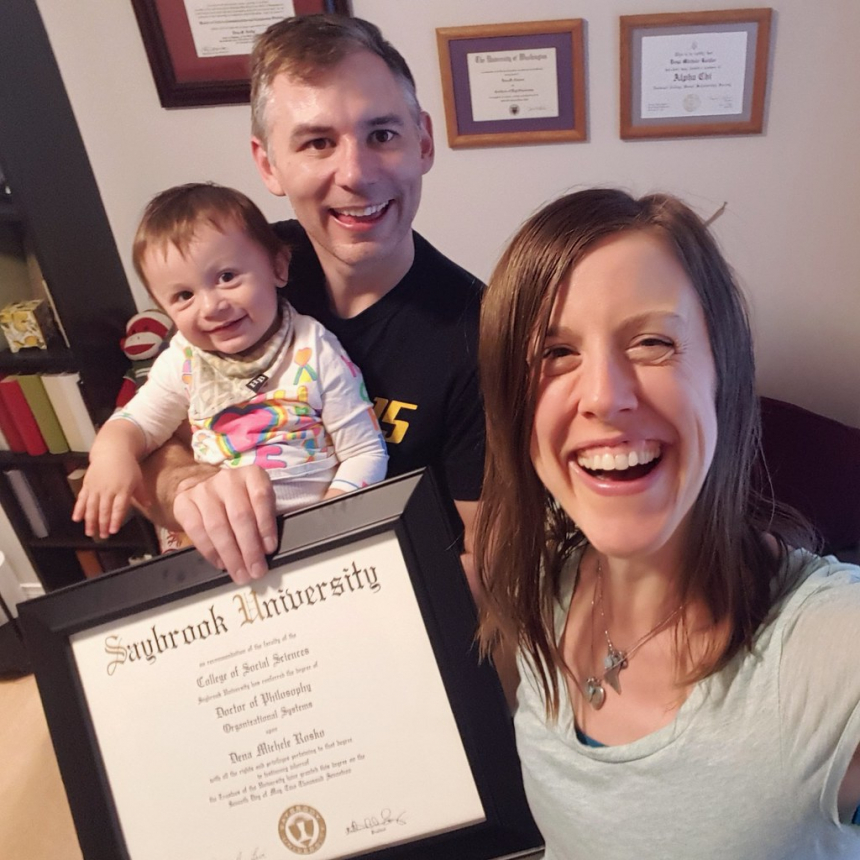 Dena Michele Rosko (BA in English and Communications 2010) graduated with her PhD in Organizational Systems from Saybrook University in 2017. Dr. Rosko welcomed her firstborn son, Graem Xavier, with her husband James in 2016. In her academic and professional life Dr. Rosko stays close to her passion for integrating writing, photography, and community engagement.  Currently, she facilitates circle groups of moms to support perinatal to peripartum transitions through a spiritual lens.   She writes poetry, reflective expository prose, and fantasy, and dreams of her family’s homestead.  Congratulation on the PhD Dena!

William Davis (BA ’00 Creative Writing) is a novelist in the Washington DC area who’s recently published two novels: Mine: Untold Secrets (“Isolated from the rest of the world, the farm is the perfect place to keep people out and other things in. Discover Katie’s untold secrets for yourself in this dark, thrilling novel and see what determines theirs from Mine”) and Mine: Origins (“In 1961 development pushes into the Amazon, and a small team of surveyors cross paths with a species that pushes back. A year later, Katie Winston, a young PhD student, accepts an assignment that leads her to the same place. The jungle reveals brilliance in the shadows, darkness in the light, and the beginning of a life she never imagined.”) Origins is a prequel to Untold Secrets, but each novel stands on its own -- read them in any order you’d like!

John Thonssen (BA 1982) retired from The Boeing Company in September 2019 after 35 years as a technical writer. At Boeing Thonssen worked on new business proposals that resulted in more than $100 billion in contract awards. He managed the technical editing group, and was writing groups lead. Thonssen saw three shuttle launches, held a moon rock, learned how air traffic patterns are developed and modified, and wrote documentation for almost every Boeing product. In retirement he plans to travel, fish, golf, write, and visit family more often.  Enjoy your retirement John!

Johanna Stoberock (MFA 1998) is the author of the acclaimed novel City of Ghosts. Her honors include the James W. Hall Prize for Fiction, an Artist Trust GAP award, and a Jack Straw Fellowship. In 2016 she was named runner-up for the Italo Calvino Prize for Fiction. Her work has appeared in the New York Times, the Best of the Net anthology, and Catamaran, among others. She lives in Walla Walla, Washington, where she teaches at Whitman College. Professor Stoberock’s new novel is Pigs (Red Hen Press), characterized by its publisher thusly:

Four children live on an island that serves as the repository for all the world’s garbage. Trash arrives, the children sort it, and then they feed it to a herd of insatiable pigs: a perfect system. But when a barrel washes ashore with a boy inside, the children must decide whether he is more of the world’s detritus … or whether he is one of them. Written in exquisitely wrought prose, Pigs asks questions about community, environmental responsibility, and the possibility of innocence.

As with her first novel, Pigs has been received with excitement by reviewers.  English Matters particularly likes Ted Scheinman’s take in the Pacific Standard, as it addressed the most obvious critical concern – does the allegory alone do the heavy lifting?  Scheinman says not even close:

Johanna Stoberock's second novel is a grotesque and luminous thriller with a big, swashbuckling allegory at its core, and Stoberock's own magic trick is to populate the island with characters sufficiently rich to elevate the novel far beyond parable or admonition. It's a beautiful book that I can't wait to reread.

William R. Phillips (BA '71) is Clinical Professor Emeritus of Family Medicine at the University of Washington.  Dr. Philips received a Fulbright Senior Scholar Award to study and teach in Dublin at the Royal College of Surgeons of Ireland in 2020. He will teach scientific writing and develop programs to improve patient-doctor shared decision making. He has also been honored with the 2019 Maurice Wood Award for Lifetime Contributions to Primary Care Research by NAPCRG. The North American Primary Care Research Group is the world's premier family medicine research organization and the Wood Award is its top honor.

Recently profiled in the Gonzaga University blog To Be Continued, UW alum Dr. Michael Herzog, Professor Emeritus at Gonzaga, has published a new historical fiction novel about Geoffrey Chaucer titled This Passing World.  Gonzaga’s press office encapsulates this effort nicely: “Set around an imagined modern-time discovery of the poet’s long-hidden journals, Herzog brings a contemporary context to Chaucer’s reflections on his multiple roles as a bureaucrat, courtier and poet — capturing the spirit and the reality of the poet’s age while honoring the work and legacy of his enduring vision.”  Read more here.