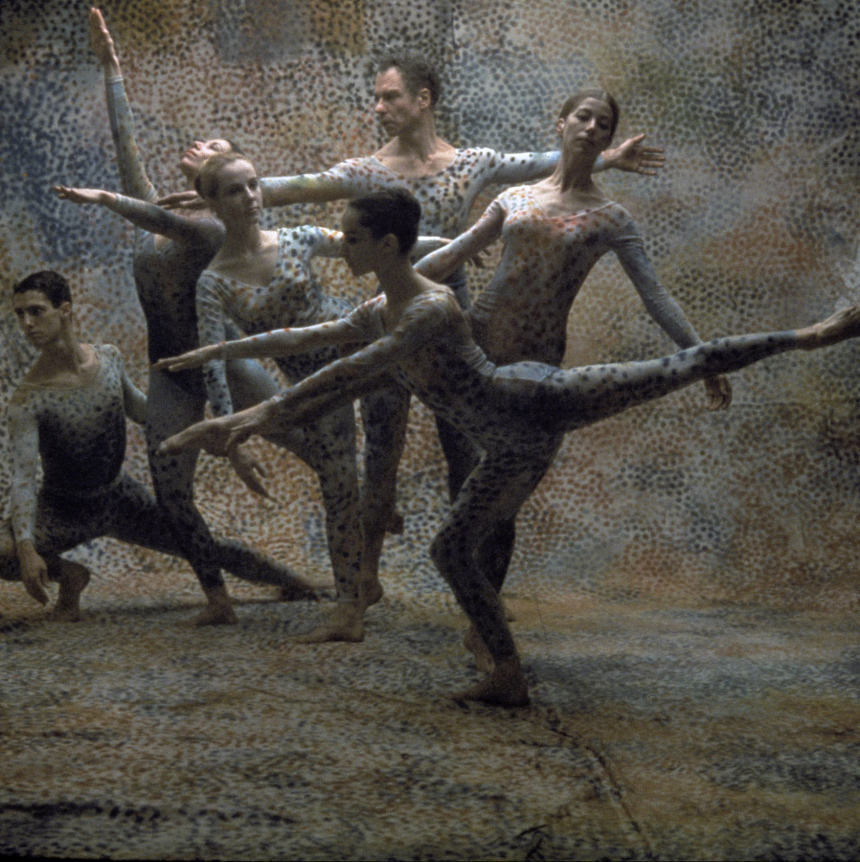 Comedian Martin Mull once quipped that writing about music is like dancing about architecture—in other words, seemingly absurd. Nevertheless, since I first wrote a short story about a Cubist baby, I have been doing just that—using one art to engage with another. For the past year and a half, I have turned my attention to the art of choreographer Merce Cunningham.

I’m not alone in paying attention to Cunningham this year. Throughout 2019, dance companies, dance historians and critics, former dancers, and audiences everywhere have been celebrating the 100th birthday of one of the 20th century’s most important choreographers. Performances of his work have taken place from Abu Dhabi to Canberra to Los Angeles to Mexico City to Paris to Quito to Rome to Yokohama. Two films about his work have premiered, several new books about the choreographer have been published, and former Cunningham dancers have taken the stage to discuss him, his dances, and the impact he had and continues to have on modern dance.

In the summer of 2018, I was asked to participate in one of these celebrations by writing about Cunningham and then reading my work in a performance at Velocity Dance Center in Seattle. I’ve spent the time since interrogating and reveling in his legacy—reading essays by and about him, watching performances and videos of his dances with joyous attention, and rereading the journals I kept as a teenager when I took classes at his studio in New York—in the days when I thought I might become a dancer instead of a fiction writer. The Merce Cunningham Trust has granted me access to their archives, allowing me to delve deeply into choreographic notes, concert programs and reviews, and the video record of over 100 dances. Through all this, I’ve been writing essays and poems, trying to figure out why the work of this artist from a different generation, working in a different medium, continues to speak to me.

Cunningham was born in 1919 and grew up in Centralia, Washington. He went to Cornish College in Seattle for a couple of years before joining the Martha Graham dance company in New York City in 1939. Almost immediately he began choreographing his own work as well, and by 1953 had established his own dance company. While at Cornish, he met John Cage—probably the most important American avant garde composer of the 20th century. They became artistic and life partners and were together until Cage died in 1992. Cunningham lived and worked for another 17 years, until his death in 2009. Over his long career, Cunningham revolutionized modern dance in many ways, but three have been particularly important. Like visual artists in the 1940s and 50s, he was interested in the materiality of his art form. If painters were interested in the qualities of paint, canvas, and frame, Cunningham was interested in movement itself, not in dance that told a story or set out to express a particular emotion. Then as Cunningham and Cage worked together and eventually connected with other composers and visual artists, they developed a revolutionary method that allowed the collaborators to, as Cage said, be “together in the same place and the same time… leaving space around each art.”[1] Often no one—including the dancers and Cunningham himself—saw the whole thing together until the dress rehearsal or even the first performance. Thirdly, Cunningham famously used chance operations to construct his work, seeing these methods as a way to free “[the] imagination from its own clichés.”[2]

In writing about Cunningham, I’ve been intrigued to think how I might apply these ideas, and his other approaches to choreography and to life as an artist, to my own work. As a writer leaving middle age behind, I look to Cunningham for guidance. He kept dancing into his eighties, despite severe arthritis, and choreographed his final piece just months before his death. As a fiction writer long obsessed with form and fairy tales, I admire Cunningham’s ability to both honor and break with his obsessions. His movement vocabulary is immediately recognizable and he relentlessly pursued an interest in the nature of movement itself, but he also used chance procedures and, later in life, computer programs, to escape his own preoccupations. I wonder if similar experiments will allow me to push past my own artistic limits. In our time, Cunningham’s non-narrative and highly intellectual dances can seem out-of-sync, but their complexity and open-ended structures also prepare their creators and viewers for political action, democracy, and engaged citizenship; both dancers and audience members must actively make their own sense of the work. Spending over a year paying close attention to Merce Cunningham’s legacy had led me to generate new approaches, escape old habits, and make room for many different types of collaboration.

If you’d like to access film, photos and other materials related to Cunningham’s work, I urge you to visit the Cunningham Trust website (https://www.mercecunningham.org/). If you follow them on Instagram (https://www.instagram.com/mercetrust/), at least one delightful snippet of a Cunningham dance, along with news about Cunningham-related events, will show up every day. If you’d like to read more by Cunningham, check out his book Changes: Notes on Choreography and The Dancer and the Dance: Merce Cunningham in conversation with Jacqueline Lesschaeve. John Cage’s love letters to Cunningham, in Love, Icebox, provide a window onto their relationship and life of artists in New York City in the 1940s. Carolyn Brown’s and Marilyn Praeger’s memoirs about dancing in Cunningham’s company, Chance and Circumstance: Twenty Years with Cage and Cunningham and Dancing with Merce Cunningham, are also wonderful. For overviews, photos, timelines, and interviews, James Klosty’s Merce Cunningham, David Vaughn’s Merce Cunningham: Fifty Years, and the Walker Arts Center’s Merce Cunningham: Common Time can’t be beat. Finally a 3-d film, simply called Cunningham, will be released on December 13, 2019. Hope to see you there if it’s screened in Seattle!

Professor Maya Sonenberg has taught creative writing at UW since 1993 and has served as Director of Creative Writing and Associate Chair of the English Department. Some of her essays on Cunningham are forthcoming in Gargoyle and The Spectator. Previous books and chapbooks include Cartographies (winner of the Drue Heinz Literature Prize) and After the Death of Shostakovich Père. You can find her at https://mayasonenberg.com and occasionally on Twitter @MzzS36019.