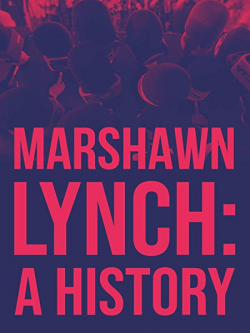 This past spring English Matters announced the imminent release of Professor David Shields’ documentary film, Marshawn Lynch: A History (click for the trailer).  Since then Lynch premiered at the Seattle International Film Festival to great acclaim, was selected to appear in the International Documentary Film Festival of Amsterdam (the premier documentary film festival in the world), and has filtered through to a variety of online distribution points.  Many documentary films use collage; Lynch is a master class in collage technique.  Virtually entirely composed of snippets of footage pulled from the internet, the film is deeply communicative and riveting, to extents surprisingly far beyond what one might expect of a documentary devoid of controlling narration.

"Lynch feels like the culmination of Shields’s career. . . . Lynch is loosely chronological, yet it's propelled by a free-associative rhythm that the viewer slowly settles into. . . . Relying on found footage gives Lynch an aura of unscripted authenticity. . . . Shields’s drifting approach allows him to make persuasive and even moving arguments that proceed by accumulation and association rather than by simple exposition. . . . [It is] edited together from a dizzying range of sources. . . . . Lynch requires you to make sense of how seven hundred clips—some of them very disturbing—piece together. It begins to seem startling that such a small gesture, like Lynch refusing to answer a reporter’s query about how he was feeling after practice, could become so disruptive or, as Shields suggests, contagious. . . . When [Marshawn Lynch] refused to speak to the media, or when, in a 2017 NFL game played in Mexico City, he stood for the Mexican national anthem but not the American one, he became a different, and more threatening, kind of symbol. Lynch is at its most stirring in these polemical moments, when Shields’s careful splicing gets at the underlying truths of American life—the outright hostility that lurks just beneath the pundit’s coded innuendo, the paradox of what forms of violence are tolerated.  . . . The film’s relentless rhythm overwhelms and overpowers you, as random acts of terror, across time and space, reveal themselves as a pattern. It’s a gradient of American carnage. Lynch: A History shows that there’s something powerful about the way Lynch protects his spark, shields it from the expectant masses. Sometimes joy is a private matter. ’Shout out Oakland, California,’ Lynch says at one point, smiling, and you begin to see an entire world in his eyes. . . ."

English Matters viewed Marshawn Lynch: A History with an art historian, an accountant, and a bright 5th grader, all glued to screen from title to credits. Our viewing party’s consensus accords with Professor Hsu: the film makes a strong case that a history of racist exploitation and institutional violence underlie Marshawn Lynch’s signature silence, and that his refusal to dance when the powers that be turn on the music is a form of protest literally unarticulated.  We found arch cleverness too in Shield’s silence in the documentary.  While it would have been expedient to include his own voice in classic documentary voice over, explaining how all the images are meant to connect, Shields’ silence echoes Lynch’s silence.  Marshawn Lynch doesn’t explain what his seeming non-performance means or why he’s doing it.  David Shields layers on top of that a film that just shows things, doesn’t draw any conclusion for the viewer.  The great success of Lynch is leveraging collage so expertly that it creates an understanding that surpasses telling.  It’s a film that you just get, both intellectually and emotionally.

Marshawn Lynch: A History brims with intense meaning and with serious subject matter, and yet still is not at all a film without joy – there’s a warmth to Lynch, both the man and documentary film, that emanates throughout.  To be certain, this joy is Lynch’s, exists in his well-insulated private world, and is not particularly meant for broad consumer consumption, or even the sympathetic documentary film audience’s edification.

You can listen to David Shields speak about his life, work, and more here on podcast WTF with Marc Maron, a contemporary media of record for long-form conversational interviews with entertainers and luminaries, ranging from Reza Aslan, to Joan Jett, to Barack Obama.  Good company David!