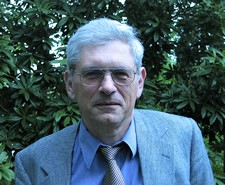 English Matters applauds the noteworthy career of retiring Senior Lecturer Nikolai Povov.  Popov is a Bulgarian academic, writer, and translator who defected to the US in the mid 80s.  He translated James Joyce’s A Portrait of the Artist as a Young Man into Bulgarian, and introduced and/or edited translations into Bulgarian of novels of Tobias Smollett, Henry James, John Fowles, and others.  Popov’s account of what best sums up his  career in academe and literature is that “English was life for me, in the dark days of former Eastern Europe when writers like Joyce, Kafka and Beckett were banned and every translation or article had to contend with severe censorship; in the US where I dedicated myself to the teaching of the great books of our civilization and increasingly felt like Eliot’s character (shoring fragments of the past against the ruins of pop culture, semi-literacy, and fake intellectualism). The eighteenth century with its commitment to reason and order, its humor, and its dark premonitions became my refuge in a chaotic and vacant new world.”

Thanks Professor Emerita Heather McHugh for her below reprisal of Popov’s academic career and intellectual pursuits.

Our congratulations go out to Nikolai, and our thanks to Heather!

Nikolai Popov came to the UW in the early and mid-1980's, first as an exchange scholar and translator first in Slavic Language and Literatures, then in Comparative Literature.  His translations of works by James Joyce and other major English language literary figures had already been published in Bulgaria, but after his defection in the mid-1980s he re-acquired his academic credentials while teaching at the UW.  Except for one term's visiting appointment at UCLA, he continuously taught Seattle courses in literature and theory (especially European literary modernism), as a Senior Lecturer for the English Department.

He received awards for teaching and for translation, in particular for his part in the translation of poems by Paul Celan, GLOTTAL STOP, warmly praised in the New York Times Book Review and elsewhere, for which book he and co-translator Heather McHugh won the Griffin International Poetry Prize in 2001. The duo also translated poems of Blaga Drimitrova.  Popov's essays on translation, modernism and literary "difficulty" have appeared in journals and other collections (see his essay in Homage to Paul Celan, ed. Waldrep and Kaminsky, Marick Press 2012) as well as at literary conferences (University of Southern California and University of Iowa).  He steps down from university teaching in 2020, in high hopes of hiking and skiing  excursions.