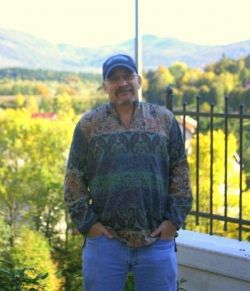 I worked construction for twenty years. In my forties, I began to think about what kind of life I wanted, as opposed to the life I had stumbled into. What I wanted was to travel and write and loaf.  I’d been writing for years, but had yet to publish a word. And who could afford to travel? Of course, writing could hardly pay the bills, but the idea appealed to me. On the other hand, I felt a debt of gratitude to the teachers who had helped me through some very difficult times in my youth. I wanted to repay my debt. But how? Swallowing my fear, I entered the UW with an eye on teaching.

I earned my B.A. in English in 2001. After that, I was offered a scholarship to the University of California at Davis, where I earned my M.A. in Creative Writing. Eleven of the twelve stories in my master’s thesis published, and several awards won, unfortunately I was unable to find a teaching position. Fortunately, I still had the option of being a bum, so I travelled to India. For nine months I travelled, loafed, and drank tea. I wrote a book of short stories and began a novel.

I applied to the Creative Writing Program at Florida State University. I can’t imagine what they thought about an applicant with no return address wandering in India, but they accepted me anyway, and I earned my Ph.D. in 2008. I was fortunate to find an assistant professorship at the American University in Kabul. I taught there for one semester before landing my current position at the American University of Bosnia and Herzegovina.

Bosnia suffered terribly during the war of 1992–95. It was poor to begin with, but after the war, the place was in ruins. Today I repay my debt by helping, in some small ways, a nation to rebuild. I teach creative writing, composition, literature, and business writing. I try to have a positive influence on my students and to tell them that they can succeed, they can choose the direction of their lives. I spend my breaks loafing and drinking coffee. I’ve been to twelve foreign countries so far, and next week I go to Montenegro with a group of Bosnian mountaineers to tour medieval cities and go climbing ( http://www.melvinsterne.com/) Oh, and that novel I wrote in India is to be published this spring.