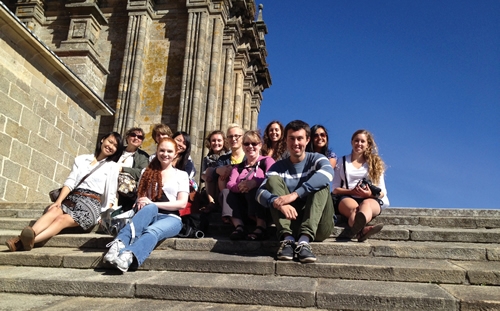 Early Fall Start 2012 and 2013 saw the inauguration of a new option within the English Department’s MATESOL Program (Master of Arts in Teaching English to Speakers of Other Languages): an internship in Léon, Spain, led by MATESOL Director, Professor Sandra Silberstein and Advisor Mary Nell Sorensen. MATESOL students who elected this program served as mentors to UW undergraduates as they worked together to develop conversation courses for adult students in the University of Léon’s Modern Language Center (Centro de Idiomas).

With no set curriculum but very eager students, the UW group worked daily to develop classes that met the communicative needs of Spanish students ranging in age from recent graduates to well-established professionals, all hoping to gain more English facility for business and job placement, travel, and further study. One student group developed their own fictitious corporations, presenting compelling arguments for funding. Another planned trips and interviewed each other as prospective hoteliers or patrons. Some studied health vocabulary, both for family and professional needs. And, this past summer, all enjoyed giving their UW visitors tours of the city, mostly in English.

The UW Léon Center is housed in the 16th-century tower of the Palacio del Conde Luna in the historic medieval center of the city; UW students attended daily seminars there to support the teaching they did through the Language Center. Located in the temperate northwest of Spain, the city of Léon boasts a number of architectural gems: its 13th-century cathedral, a masterpiece of French-style gothic architecture; one of the most important Romanesque churches in Spain (Basilica of San Isidoro); a Renaissance monastery; and the lovely Casa Botines, a Modernist building by the architect Antoni Gaudí.

Teaching English in Léon to native Spanish speakers gave participants a “foreign language teaching” experience they could not gain in Seattle. Through immersion in a “foreign” culture, the program sought to develop cultural awareness, experience, and empathy that would make participants stronger teachers of English in the United States and elsewhere. In the end, evaluations indicated that students “learned a lot from the program,” “grew as teachers,” and had a terrific time. This summer, we are hoping to bring the program to Agadir, Morocco.