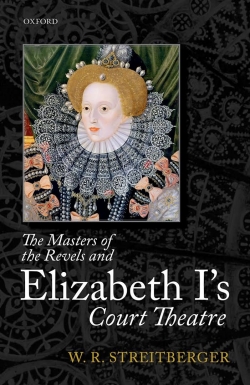 Professor William Streitberger has won the prestigious David Bevington Prize, which is awarded annually by the Medieval and Renaissance Drama Society for the best new book in early drama studies.

"The Masters of the Revels and Elizabeth I's Court Theatre places the Revels Office and Elizabeth I's court theatre in a pre-modern, patronage and gift-exchange driven-world of centralized power in which hospitality, liberality, and conspicuous display were fundamental aspects of social life. W.R. Streitberger reconsiders the relationship between the biographies of the Masters and the conduct of their duties, rethinking the organization and development of the Office, re-examining its productions, and exploring its impact on the development of the commercial theatre. The nascent capitalist economy that developed alongside and interpenetrated the gift-driven system that was in place during Elizabeth's reign became the vehicle through which the Revels Office, along with the commercial theatre, was transformed. Beginning in the early 1570s and stretching over a period of twenty years, this change was brought about by a small group of influential Privy Councillors. When this project began in the early 1570s the Queen's revels were principally in-house productions, devised by the Master of the Revels and funded by the Crown. When the project was completed in the late 1590s, the Revels Office had been made responsible for plays only and put on a budget so small that it was incapable of producing them. That job was left to the companies performing at court. Between 1594 and 1600, the revels consisted almost entirely of plays brought in by professional companies in the commercial theatres in London. These companies were patronized by the queen's relatives and friends and their theatres were protected by the Privy Council. Between 1594 and 1600, for example, all the plays in the revels were supplied by the Admiral's and Chamberlain's Players which included writers such as Shakespeare, and legendary actors such as Edward Alleyn, Richard Burbage, and Will Kempe. The Queen's revels essentially became a commercial enterprise, paid for by the ordinary Londoners who came to see these companies perform in selected London theatres which were protected by the Council."

In a laudatory review in the Times Literary Supplement, Helen Hackett predicts that The Masters of the Revels will be "highly valued for the wealth of information that it presents, particularly in a month-by-month calendar of court revels and spectacles for the whole extent of Elizabeth's reign."

And John H. Astington concludes:  "W. R. Streitberger has produced an accomplished and well-written book; it should henceforth take its place among essential works for scholars of the early stage."