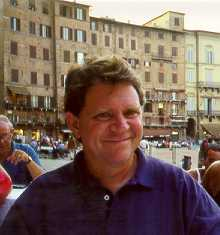 [The English Department thanks our own Professor John Webster for the following memorial, reminding us of Professor Emeritus John Coldewey’s greatness as a colleague and teacher.  Dr. Webster references Professor Coldewey’s Seattle Times obituary.  To read that piece, and to contribute your own remembrances on the platform provided alongside, please click here.  Dr. Coldewey himself caught us up on his post-retirement goings on in this 2014 autobiographical update for English Matters. – Ed.]

John Coldewey (1944-2017) came to the University of Washington in 1972; I know that because I arrived at the U in the same year.  We shared much; he and I were both new PhDs in Early Modern Studies and thus both taught a lot of Shakespeare and shared an interest in early drama.  And then there were other things.  I remember his first house up near the Seattle-Kenmore border, located on a high hill looking out over Lake Washington.  It was a genuine fixer-upper (in the fall it emitted amazing clouds of termites!), and he had already begun to learn the trades of carpenter, plumber, and electrician. My wife and I had bought a house nearer the UW but also had entered the DIY universe: at a starting annual salary of $10,700 we ourselves were pretty much the only labor we could hire.

So we had a lot in common, and we maintained our friendship well into the 21st century.  His Seattle Times obituary describes the depth and reach of his scholarship and of his devotion of retirement years to cycling.  What I remember best were conversations about teaching and about the theatre.  As I was struggling to figure out how best to make sense of what my students felt were ancient texts (like Shakespeare’s King Lear and Macbeth), John was a frequent resource.

In my first year I even went to visit his Shakespeare class to see how he taught—mostly to learn how to be a better teacher myself.  The first ten minutes were a shock for me.  His teaching style was as close to the opposite of my (still emergent) style.  He started with a single question:  “What is tragedy?”  As the seconds ticked by, no one said a word.  One minute went by, and then another and another.  A single hand went up and said “Something sad.”  John nodded, but didn’t say a word.  And then waited for someone else to speak.  After another minute or two another student added something else.  John nodded again.  And then a third voice, and a fourth voice said something.  And then, as John nodded encouragement, they were off to the races.  First one voice and then another, often in response to what someone else had just said.  The class which had seemed somnolent now was filled with students wanting to add something of their own to the conversation.

And then John spoke in return, acknowledging the multiple ideas students had offered and putting them into the broader context of the history of tragedy, all then returning to Macbeth—the play the students had just read.  I really was amazed.  This way of teaching was so different from anything I knew how to do—to be patient, to trust students to be able to invest themselves in a classroom, to work not as a teacher who delivered truth to students but as a collaborator and manager of a classroom of new but by no means incapable voices.

I went away from that class looking for ways to modify my own practice.  I wasn’t a terrible teacher, but neither had I yet learned how to get the effects John could.

John remained a colleague for many years, and though my teaching was increasingly in areas other than early modern studies, we continued to share conversations about teaching.  Though the Times’ obituary makes clear that his retirement was a splendid period for him of travel, learning, and new enterprises like cycling and skiing, he was nevertheless missed on campus by those of us whose teaching, learning, and, to be sure, DIY skills he had supported for so long.    – John Webster