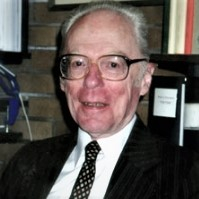 [Our need in the English Department to write obituaries for faculty passings has recently been unfortunately regular.  We thank Professor Emeritus Míċeál Vaughan for this remembrance of his elder colleague and friend Professor Emeritus Robert Stevick.  Please also read Dr. Stevick’s Seattle Times obituary, where you can also register your memories and condolences. – Ed.]

For those of us who knew Bob for his scholarship and teaching in the fields of English language studies and especially Old English, it may come as a surprise to learn that his dissertation at the other UW bore the title “E. A. Robinson’s Principles and Practice of Poetry: The Effects of His Principles of Poetry on the Technique and Structure of the Poems.” While seemingly far removed from his work on early English, his study of the Maine poet focused much of its attention on Robinson’s language -- on the metrical, syntactic and semantic aspects of his verse. As he put it in one of his few publications on Robinson, a distillation of his dissertation published in celebration of the centenary of the poet’s birth, Robinson was one who “had no need to formulate a theory” because he “learn[ed] his trade as a craftsman, not as a philosopher” while working “within a well established tradition” (Colby Library Quarterly, Series 8 [1968-69]: 301-2). His colleagues will recognize these sentiments upholding craft and tradition over ideology in views espoused in Bob’s published work and in his conversations and discussions in and around Padelford Hall.

Stevick’s teaching, like his publications, centered on the English language, ranging from rhetoric and composition to the history of the English language and linguistics. He early collaborated with colleagues from other institutions on textbooks on Rhetoric for Exposition (1961) and Composition and Research: Problems in Evolutionary Theory (1963).  In addition he produced two editions of Middle English poems in 1964 and 1967 and, in 1968, a critical study, English and Its History: The Evolution of a Language.

But most of Bob’s work in the central years of his career concentrated on Old English, especially on features of early manuscripts and what scribal practices could show about the language and meter of Old English poems.  His monograph on Suprasegmentals, Meter, and the Manuscript of Beowulf appeared in 1968, and a few years later his further work on what he called “graphotactics” (i.e., significant spacing in scribal transcription of their language) in the Beowulf manuscript led to his edition of that poem (1975). He subsequently produced a textbook he titled A Firstbook of Old English (1992; rev. 2003) and numerous articles on a variety of Old English poems in which he focused attention on their form, arithmetical design, manuscript divisions, scribal notation, and mathematical proportions. An early adopter of the computer, he published materials online on Beowulf and the Old English Alexander, as well as a unit for students on the Sounds of Old English for the Oxford University website on Teaching Old English in Britain and Ireland. Characteristic of the diversity of his work and his interest in the sounds of early English, Bob also supplied the voice of King Hrothgar in the three-CD set Beowulf: A Dramatic Reading in the Original Language.

In the early1980s, his researches turned from analyzing the implied shapes in Old English verbal artifacts to the geometries of the rich visual images found in early English and Irish manuscripts, as well as in contemporary stone crosses and metalwork.  This foray into visual aesthetics and its practical implementation again showed Professor Stevick’s scholarly range. His 1994 book on The Earliest Irish and English Bookarts: Visual and Poetic Forms before A.D. 1000 offered ground-breaking insights into the geometrical methods underlying the construction of intricate Celtic and Anglo-Saxon visual images. His excitement (dare I call it “evangelical”) about these discoveries was evident to any of us who happened to ask him about his work: he would take out his straightedge and compass and proceed to demonstrate how, with these simple tools and with both creative effort and mechanical rigor, early craftsmen produced the highly intricate interlaced patterns and other visual features on stone, metal and parchment. His insights enriched our appreciation of works such as the great illuminated pages of Irish and English Gospel books as well as other artifacts from late Antiquity and the early Middle Ages.

Dr. Stevick’s services to the University of Washington included, in addition to service on the usual departmental and college committees, two decades as a member of the University’s Advisory Committee on Faculty Code and Regulations (and for more than a decade as Chair).  After a stint as director of Graduate Studies in English (1969-71), he served a term as Chair of the Department (1971-76), the first successor to Bob Heilman.

It was in this latter capacity that I first met Bob in December 1972, a meeting that almost didn’t take place.  When I went to his hotel room on the morning of my scheduled MLA interview, a neatly inscribed note on the door read something like “Professor Stevick is unwell.  He may be able to meet you at 1:30 this afternoon.” Needless to say, that “may” raised serious anxiety for me since my wife and I had planned to leave New York right after the morning interview to drive to stay with friends in southern Pennsylvania. But (unsurprisingly) we delayed our departure. Fortunately (for me, anyway) when I came back to Bob’s room, the note was gone and he was ready to interview me.

As I recall, Bob spent most of the time selling me on the attractions of the UW and Seattle—despite the recent Boeing “bust.”  Having hiked around Glacier Peak earlier that summer, I didn’t need to be sold on the attractions of the Pacific Northwest, and it was left to me to raise the issue of my progress with my dissertation: although it was barely underway, I was confident that I’d have it completed by the end of the summer.  He assured me that the completion of the dissertation was not an absolute requirement.  In any case, I got a call from Professor Stevick a couple of weeks later offering me the job which, needless to say, I accepted, and got to work on completing my dissertation. In September, he and Glorene welcomed Sheila and me (and the other new professors of the 1973 “class”: Mona Modiano, Bill Streitberger and Ivan Kolpakoff) to a memorable dinner at their Bellevue home.  Given the décor and the conversation, it was clear that the Stevicks had enjoyed their time in Japan and Korea during Bob’s Army service.

In the two decades since his retirement in 1998, Bob remained quite active, continuing his regular participation in the Medieval Institute’s annual International Congress (in Kalamazoo).  One of those meetings (in 2006) included a session in his honor, arranged by two of his UW graduate students, Clinton Atchley and Charles MacQuarrie. Essays from that celebration along with others by students and colleagues were published in a special issue of the Philological Review in 2008. In retirement, Bob continued to traveled widely to present the fruits of his later research at conferences and symposia in North America, and further afield: Ireland, England, Wales, Poland, and Korea.

Professor Stevick’s scholarly stature was the result of disciplined, careful attention to language and visual details, and those qualities were evident to those of us who worked closely with him. For me, as for generations of UW graduate and undergraduate students, Bob was a warm, supportive mentor, whose manner in private was more open and good humored than may have appeared in more public settings.  Clinton Atchley, in his introductory essay to the 2008 festschrift, called particular attention to his “soft-spoken … lively wit and … deadpan delivery.” A person of clear and strong opinions, he attracted and encouraged younger colleagues working in his areas of expertise with generosity and warm encouragement.  Nevertheless, for his departmental colleagues who saw his rather retiring manner in Department meetings, it will take some effort to imagine him (while waiting after the ‘Zoo Congress for their Seattle flight) having a drink in O’Hare airport with his younger colleague John Webster, regaling him with details of the TV show M*A*S*H, which he enjoyed for its familiar picture of Army days in Korea.

While his quiet presence and wry humor will long color the memories of those of us who knew him well, it is his scholarship that will last longer and have wider effect.  His first publication in Old English studies appeared in our MLQ in 1959.  In it, he discussed the broader principles underlying arguments for and against emendations of scribal texts, in this instance, a single half-line of Beowulf.  The short essay revealed a mature young scholar with an impressive array of statistical and rhetorical tools at his immediate disposal, tools he would continue to employ throughout a career with decades of careful work in classrooms, conference papers, articles, editions, and books.  Bob was a teacher and scholar with a clear sense of the logical strengths and weaknesses of critical arguments, who insisted on closely assessing the evidence supporting those arguments.  He reveled in demonstrating the practical certainties of scribal practice, of measurements and shapes, and committed his labors to bringing those fundamentals into the immediate service of literary and art-historical understanding and criticism.  His sharp-eyed pragmatism and expansive notion of what’s fair game for study in an English department has made a lasting impact in Padelford Hall, and at his passing we warmly remember Bob Stevick’s contributions to our community with pride and respect.