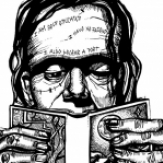 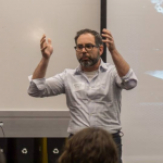 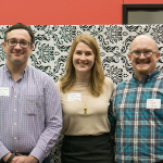 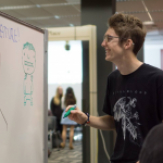 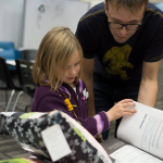 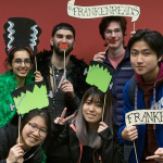 Three English Ph.D. candidates — Sarah Faulkner (a 2019 Husky 100 award recipient), Matt Poland, and Eric Morel — along with the Research Commons and English Librarian Elliott Stevens, hosted Frankenreads: an event to engage faculty, students and the public around the classic Mary Shelley novel Frankenstein.  Faulkner and peers planned the event as coordinators of the Eighteenth- and Nineteenth-Century Graduate Research Cluster, which brings together students and faculty from different disciplines to discuss and celebrate 18th- and 19th-century literature and culture.

Faulkner relates that “the main event was a series of seven ten-minute lightning talks given by local professors, graduate students and public scholars. Talk titles included ‘Mary Shelley and Romantic Women’s Writing,’ ‘Frankenstein and the Classics,’ ‘Adapting Frankenstein for the Stage,’ and ‘Frankenstein, Sci-fi, and Superheroes: A History of Influence.’” In addition to the talks, Frankenreads allowed attendees opportunities to vote for favorite passages, draw their version of the Creature, watch The Bride of Frankenstein, view a Romantic era gown replica, and take a photo in the photobooth. “We were especially excited that our guests had the opportunity to hear Special Collections Rare Books Curator Sandra Kroupa [read a recent Seattle Times profile of Kroupa here -ed.] talk about monster books, and even handle some of our hundreds-year-old books!”  Matt Poland notes the key role UW Libraries played in making this event a success and offers his thanks:  “[Research Commons Librarian] Elliott Stevens was really enthusiastic in helping organize the event after we approached him to use the Allen Library Research Commons. The support of the libraries was key to making Frankenreads fun and accessible to all the communities we wanted to include.”

The graduate students putting on this event wanted it to offer something to all: faculty, graduate and undergraduate students, members of the public, die-hard fans of the novel, fans of Young Frankenstein, and people who simply came to learn about the novel.  Faulkner believes that some academic research should be “beneficial to academic and public circles alike. Within my own work, public scholarship takes the form of academics collaborating with public scholars to create unique content and experiences stimulating to both audiences. Frankenreads opened a conversation between academic and public scholars about a mutually important and beloved subject.”

For Faulkner, who was the driving force behind public celebration of Jane Austin, Janefest, events like these are all about community. “It is immensely important to me that the university fosters connections between academia and the public, and what better way to do that than to celebrate cultural phenomena like Frankenstein?”  Cohost Eric Morel agrees that outreach is a vitally important aspect of any English department’s work, and is in fact what got him excited about Frankenreads in the first place.  In events of this sort, Morel sees symbiosis that benefits not just the public, but graduate students who learn from the perspectives of common readers as well: “These events aren’t just public service; I think we as graduate students deeply enmeshed in critical approaches to literature benefit tremendously from events like these and seeing the connections that different readers make to these texts and authors in their lives. It’s refreshing to remember that reading is lifelong and not always entered into under the sign of labor.”

Given Frankenreads’ mutual benefit to the public and professional academics, Matt Poland will soon collaborate with fellow grad student Laura Griffith and a small cadre of peers to put on a similar event honoring the 150th anniversary of Louisa May Alcott’s Little Women. Stay tuned to the English Department’s News and Events webpage for details.