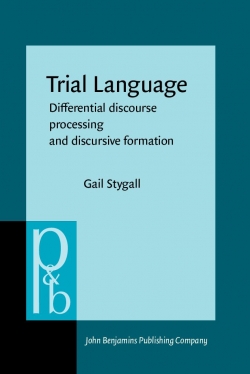 In this issue of English Matters, we report the retirements of the last three founding members of the English Language and Rhetoric Track.  Along with those of Juan Guerra and Sandra Silberstein, the most recent departure, the retirement of Gail Stygall, marks the end of an era.Professor Emerita Sandy Silberstein reprises Stygall’s impressive and impactful career.

Gail Stygall is a leading scholar in both the language of law and rhetoric/composition. In her 31 years at UW, Gail’s teaching and research—along with her faculty senate leadership, her service on the College Council and as our faculty legislative representative in Olympia, her directorship of the Expository Writing Program, and work on countless committees and task force—has helped to shape the intellectual and administrative culture of the university.

Gail joined the English Department faculty in 1990 after earning her PhD at Indiana University.  Her consequential career has shaped what became known as forensic linguistics and transformed first-year composition.  Her cross-disciplinary research has yielded a monograph on legal language, six coedited volumes, and myriad articles, chapters, and reviews.

Gail’s interest in legal language had its genesis in her post-college experience as a part-time court reporter where she overheard jurors deliberating the meaning of jury instructions.  From the perspective of the legal profession, their interpretations were almost invariably wrong!  When she returned to graduate school, jury instructions and legal language more broadly became a natural focus and the beginning of career-long consulting as an expert witness, particularly in trademark cases and jury instructions.

Gail’s consulting career has been one of consequence.  In a death penalty case, she showed how jury instructions can unintentionally lead jurors to believe they must decide for death.  In the wake of that case, the state of Washington clarified and improved instructions.

Gail has consulted for Microsoft, twice confirming their right to trademark what has become more than a simple noun: Windows.  But her favorite case was the Navajo Nation vs. Urban Outfitter.  UO was using the term Navajo for everything from bikinis to flasks.  Gail looked at thousands of fashion items that had been associated with the name.  Ultimately, a settlement confirmed Navajo royalty rights, gaining the Nation a steady (if modest) stream of income for use of the name.

Closer to home, Gail made foundational changes in the way first-year composition instructors are prepared and how expository writing courses are taught, changes that continue to undergird the program.  Since her directorship (1997-2003), all TAs have been required to take a composition training course.    Under Gail’s directorship, the structure of the course changed as well, shifting from a focus on individual papers to portfolios developed over an entire course with revision encouraged until submission.  A further innovation was the textbook, an anthology she and her assistant directors developed, updated each year, containing readings students might encounter in other courses, thus preparing them to write in a range of disciplines.

Gail has been a tireless figure in the department and the university.  In English, she has taught more than 30 different courses and chaired 21 dissertation committees.  The synergy with which Gail’s work crosses fields has helped to create a unique intellectual community for us and generations of graduate students in the department’s Language and Rhetoric track and beyond.