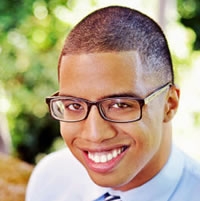 My experiences in the English department over the last three years have allowed me to develop an unshakeable passion for research in African American literature. My research interests include African American literature on identity, personhood, biracialism, and intra-communal class interaction. During my freshman year I wrote a piece of counter-criticism to Chinua Achebe’s work on Joseph Conrad’s Heart of Darkness. Achebe takes issue with Conrad’s use of racial epithets to describe Africans in the novella, deeming Conrad “a thoroughgoing racist.” I was curious about Achebe’s interpretation of the use of epithets, so I read the Conrad novella four times, notating all forty-six instances of these racial markers. I then evaluated the contexts and tones of the passages containing the epithets, and found trends in Conrad’s use of each particular term that confounded Achebe’s label of Conrad as a “thoroughgoing racist.” My research on the Achebe project incorporated literary, historical, and anthropological investigation—at times I was researching the history of the word “savage” and at others reading firsthand accounts of early 20th century imperialist documents. Through this project I discovered the appeal of English’s interdisciplinary nature.

In my junior year I acquired two brilliant mentors: Professors Habiba Ibrahim and Sonnet Retman. The two of them worked closely with me as I wrote an extended research paper examining Paul Beatty’s novel The White Boy Shuffle and Trey Ellis’s Platitudes. My research centered on how both authors employed black stereotypes and “traditional” black literary forms in their fiction to show the fissures of African American community and identity. Both narratives highlight main characters that struggle with being “traditionally” black as they reach adulthood. I honed in on how the authors employed black stereotypes to affect the perception of their characters’ authenticity, and related this to real life.

As I wrote the thirty-page research paper, my mentors gave me an abundance of resources to guide the development of my text, and I grew accustomed to reading upwards of ten separate scholarly publications to aid in the penning of just a couple pages of my thesis. The tremendous amount of reading I have done the last two years has improved my processing and comprehensive skills to a level where I can comfortably read and annotate two novels in a week. I hope to consume as many texts as possible in the upcoming year to really broaden my literary scope and be well-conditioned for the amount of reading in graduate school.

More information about Alex's research experiences can be found in the Spring 2013 issue of English Matters.