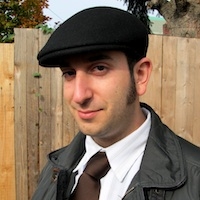 My research as an undergraduate helped build my skills as a scholar and has guided me on my path to graduate study. Classes in American literature, Critical Theory, Linguistics, and Rhetoric were critical in developing my academic interests, but it was only through independent study that I was able to take those interests and develop highly specialized research and knowledge.

An interest in 19th century American culture and folk tales led to my first independent research project under the guidance of Dr. Kimberlee Gillis-Bridges. In this paper I explored the diasporic evolution of marital-preparatory discourse found in Acadian-Cajun folk tales. I was surprised to see that focused research on the Acadian diaspora is quite sparse. As I found out, even after a century of institutionalized study in a field, some of the information a new researcher may recover is quite recondite. And in the case of working across disciplines, one often has the chance to create entirely new modes of thought on subjects that may have been visited by scholars many times over.

The English Honors program also yielded several opportunities for research. Through an honors seminar with Dr. Laurie George, I researched the practice of transcendentalist friendship as it was seen by Ralph Waldo Emerson and Henry David Thoreau, and was able to discuss the appearance of this phenomenon in Jon Krakauer's modern work, Into the Wild.

Pure background research is another avenue that often yields valuable information to shape further critical insight. In Dr. Thomas Lockwood's honors seminar I took it upon myself to look into the history of tobacco, and how it has been perceived and used, particularly in forms that were sniffed. In Dr. Colette Moore's language ideology class, I investigated the official English movement in the United States, and particularly in the state of Arizona. (As a result, I imagine I now know more about official language movements than most of their proponents and opponents, and more about snuffboxes than most field-trained tobacconists.)

All of my studies culminated in a fifty-page honors thesis on Herman Melville's "Bartleby, the Scrivener: A Story of Wall Street." With the advice of several of my past professors and the supervision of Dr. Lockwood, I examined the anaphoric nature of Bartleby's statement, "I prefer not to," by placing it under the lens of linguo-philosopher J.L. Austin and rhetorical theorist Kenneth Burke. With the additional aid of contemporary rhetorical theorists and insights from critics like Giorgio Agamben, Walter Benjamin, and Henri Lefebvre, I was able to describe how meaning is conveyed and how perception is built in Melville's narrative. But in order to more meticulously analyze the text of "Bartleby," I also wrote a computer program to take a statistical accounting of the frequencies of its word usage.

Each of these research projects contributed to my understanding of not only writing, but of communication itself, as it occurs at the level of the sentence all the way up to the level of narrative. I have also been given the chance to present my findings at several academic conferences thus far. The research methodology I developed has led me to consider future work that mixes literary theory and the digital humanities, which, alongside nineteenth-century American literature, is now my intended area of study for graduate school.