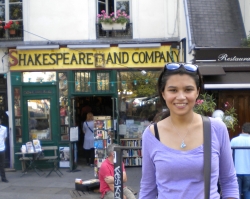 My research as an undergraduate centered on the intersections between high school English language arts and English as a post-secondary field of study, between literature and rhetoric, composition, and critical thinking. During Winter 2012, in Frances McCue’s Honors course on teaching, I researched the new and widely adopted Common Core State Standards and the influence they will have on the arts in education. I conducted interviews with English Language Arts teachers in the Shoreline district in order to get a sense of how the Common Core was functioning “on the ground” in its first year of implementation, and if the standards changed the ratio of literary and informational (non-fiction) texts they assigned and taught. From this research, I learned how teachers negotiate between their personal philosophies of teaching and the expectations of administration and government, and concluded that although the Common Core would not likely change the amount of literature taught in the English Language Arts classroom, it might very well change the way educators framed literature’s relevance, usefulness, and relationship to skills such as composition, argumentation, and critical thinking.

During spring quarter 2012, I investigated this possibility as part of the research for my 32-page honors thesis and Undergraduate Research Symposium presentation. After performing a close analysis of the Common Core State Standards, I discovered that the Standards made the following assumptions about literary texts: they are not argumentative texts, they therefore cannot be used to teach students how to analyze and produce effective arguments, and they are therefore largely irrelevant to the Standards’ central goal of promoting College- and Career-Readiness. As a scholar of the humanities and an interdisciplinary writing tutor, I suspected that these assumptions were problematic and extended my research to investigate 1) the way postsecondary institutions framed literature’s relevance, usefulness, and relationship to skills such as composition, argument, and critical thinking, and 2) how a high school English Language Arts teacher could productively incorporate literature into the teaching of composition, argumentation, and critical thinking. After analyzing relevant academic literature from scholars of postsecondary education, composition, and literature, I concluded that the context of knowledge-production in postsecondary institutions demands not only the ability to write arguments, but also the habit of thinking argumentatively about everything, including literature. As a response to the discrepancy between how the Common Core and postsecondary institutions frame literature’s relevance and usefulness, I concluded my thesis by sketching out a theory for using a rhetorical framework to bridge the apparent gap between literature and argumentation.

On the whole, my undergraduate research allowed me to explore the issues I care about most as an aspiring high school English Language Arts teacher and enriched my understanding of why the study of literature matters.

More information about Melanya's research experiences can be found in the Spring 2013 issue of English Matters.