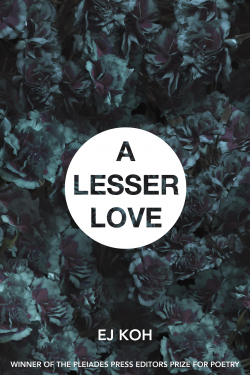 Love, war, and heaven all fall within the scope of this ambitious yet unpretentious collection of poems by Koh, the Seattle-based daughter of Korean immigrants. Unshirking, Koh’s verse is spare, evocative, and gut-moving, drawing out into interludes of clever reflections on cultural place.

“The test of a first-rate intelligence,” F. Scott Fitzgerald wrote in Esquire in the spring of 1936, “is the ability to hold two opposed ideas in the mind at the same time and still retain the ability to function.” Nothing could come more naturally to E. J. Koh, a “time mechanic” whose mind leaps across great chasms (temporal, logical, emotional) with a superhero’s grace and purpose. Koh’s poems unite realities habit opposes: love, pain; the absent, the present; the present, the past; laughter, sorrow; harsh reality, foggy myth; the living, ghosts. Later on in 1936, at the Summer Olympics in Berlin, marathon runner Sohn Kee-chung would become the first Korean ever to win the gold. The way a line exists between any two points, connecting them whether they know it or not, so Fitzgerald and Sohn are also connected, but not merely by a single line—by an infinity of possible relations. One of these is Koh, whose vision fuses American and Korean culture determinedly but nonchalantly, whose distinctive voice can startle as it soothes, and whose invention is a book that delights, disrupts, razes, edifies, and refuses ever to be just one thing. In other words, A Lesser Love is first-rate, intelligent, and pure gold—a triumph.

Love, war and recovered testimony from Korea’s unhealed border inform the formal and imaginative boundaries within E. J. Koh’s panoptic poems. Koh imagines the details of her own CIA file, revises the Pledge of Allegiance, and translates Beyoncé. With acuity and dexterity, this poet leaps into the dangers of the present.

— D. A. Powell, author of Useless Landscape, or a Guide for Boys

E. J. Koh’s poetry is born from the pain of immigration, the pain of immigrant parents—their relentless labor for survival, their neglected children. Koh is also an inheritor of Korea’s violent history, so her language is crevassed and laced with historical anger, loss, and violence. A Lesser Love is a remarkable debut book that exposes broken love, broken bodies across the sea of migration and history.

— Don Mee Choi, author of Hardly War and The Morning News Is Exciting